by Brandon Mietzner on September 16, 2014 in Cooling

Thermaltake is taking us from Extreme to Ultimate with its new Water 3.0 closed-loop CPU water cooling solution. This brings us up to three 120mm fans, a doubling of the cooling surface, and a more powerful pump. This makes it the biggest and strongest Water offering yet. Will this effort bring prefab water cooling to new heights?

I have been building custom water cooling PCs for the past 8 years now. There are a lot of things that I love and hate about it, the biggest con being the cost. This cost includes the pump, reservoir, tubing, fittings, water blocks, coolant and maybe water cooled components with custom water blocks out of the box.

After putting all the time into finding the parts needed, we can’t forget about what has to go into setting up the tubing, priming the coolant, and checking for leaks. This really hampers one’s ability to quickly turn a system around when you buy new gear or need to replace, well, anything. However, when all of it is finished, the benefits can be spectacular.

There have been many attempts to mitigate the cost and time needed to achieve the benefits of water cooling, most notably by using a closed-loop system. Some custom water cooling builders would say a closed loop system has too many limitations, mainly that the heat displacement isn’t as efficient, or silent, or that they are a one trick pony by providing cooling to only one component. While the latter may be an undeniable truth, Thermaltake has introduced the Water 3.0Water 3.0Water 3.0 Ultimate to ensure the former problems are a thing of the past.

The last time Techgage looked at one of the Water 3.0 models, it was with the Extreme. This provided a robust amount of cooling for someone who wanted to achieve a modest amount of overclocking. This came at a few costs, like noise and higher temps when pushing the limits. This time we have 3x120mm fans, increasing the surface area to keep the CPU cooler, and hopefully, with less noise.

The Ultimate maintains the same 27mm radiator depth that we saw with the Extreme and Performer, which makes it a single pass coolant system. There are dual pass radiators out there, like the Tt Pro, but those aren’t as effective as the Extreme due to surface area. 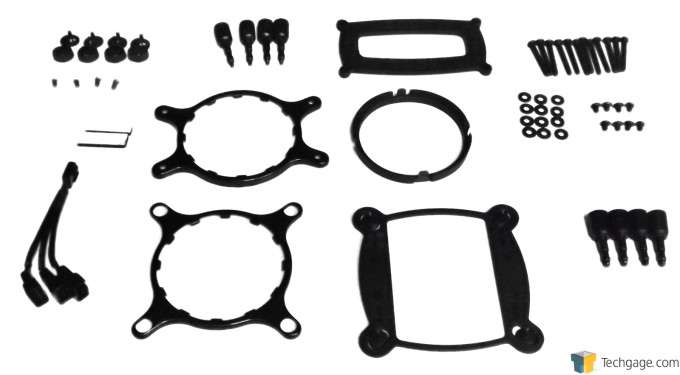 The CPU waterblock is by far the heaviest and most robust piece in this kit. This is something that makes me extremely happy to see. Too many manufacturers that produce CPU waterblocks cut corners by reducing as much of the surface area to the CPU as possible. By providing more copper for this waterblock to absorb heat, it will allow the CPU to run a little cooler.

Just like the Extreme, the Ultimate comes with Thermaltake’s brand of fans, 20 dBA and 99 CFM. This dBA rating is the minimum that the fans operate at. Sadly we may not get that sort of performance at full RPM. 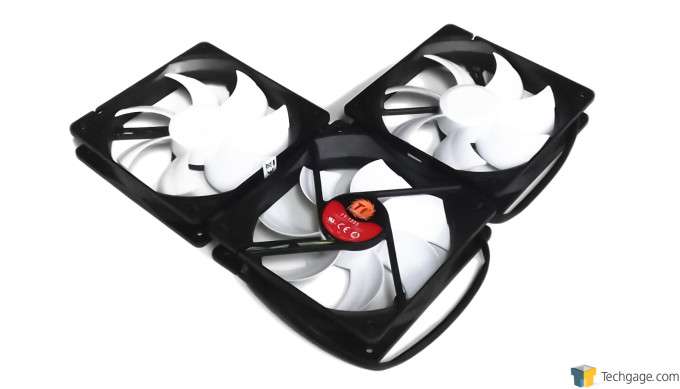 The kit also includes a 3-to-1 4-pin fan power splitter. This is so you can plug the fans into the CPU fan plug on your motherboard. The pump is plugged into whatever secondary fan plug is closest to your CPU. This allows your system to control the fans and the pump dynamically. I personally prefer this option over the software one that was introduced with the Extreme.

The Ultimate also includes the option for you to increase its air flow to make it even more effective. Just like the Pro and Performer, you can set this unit up to blow air in one side and then pull that air out on the other side. This may sound like overkill, but for those planning to put their PC in a tight space or in a room with an above average temp, this is a noteworthy option.