A Quick Look at Sabayon 6

Today, it’s not difficult to find a ‘great’ distro, one that makes it easy to get up and running with a fully functional and robust desktop, fast. Even just five years ago, though, finding a ‘do it all’ distro was a little more difficult, and it was for that reason that I found myself loving Sabayon Linux (pronounced Sah-by-yon (silent ‘n’)). Despite being built on an intermediate distro, Gentoo, it made things easy on the layman user – and I know this to be true as I’ve had many Linux novice friends use it and enjoy it.

As it’s been a ridiculous number of years since I’ve last looked at the distro, I’ve anticipated the release of 6 quite a bit over the past couple of months. As soon as it became available, I downloaded the x64 KDE edition and got to installing. Similarly, Jamie, our kick-ass peripheral and game guy, also decided to take it for a spin

Let’s tackle the basics. Project lead Fabio Erculiani has deemed GNOME 3 not quite ready for prime-time, so that’s been left out until the next major release (which could be 6.5, or simply 7). Instead, GNOME 2 has been upgraded to its absolute latest version, 2.32.2, while KDE has also experienced an upgrade, to 4.6.4. Other major software packages include GRUB 1.99, LibreOffice 3.3, GCC 4.5.2, Python 2.7, Xorg 1.10, a switch to IcedTea6 for Java use, a switch to Chromium in lieu of Firefox for the default browser and Entropy 1.0_rc10, Sabayon’s package manager.

One feature added that I’ve not heard of before is the splitting of both the AMD and NVIDIA graphics drivers to become userspace and kernel modules to make migration from one kernel to another a seamless process. This would be to prevent the need to reinstall either of the graphics drivers if you wanted to install a different kernel manually – something that drives me nuts anytime I upgrade to the latest kernel on my Gentoo install.

After booting up with the Live CD, you’ll be greeted to a couple of different options. Because the team has bundled a music track to play during the boot, you can choose the second option to boot up without it. You can also choose to boot into a Media Center mode (xbmc) and also an environment better suited for low-powered netbooks.

Once booted into the KDE environment, you’ll see something like this: 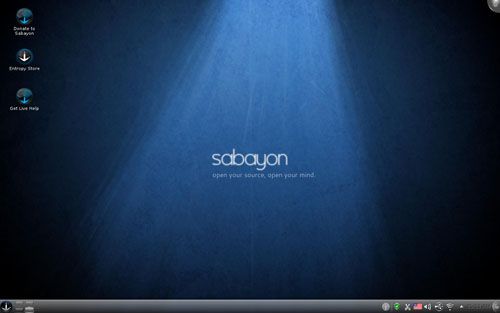 Overall, the entire theme looks quite nice. It’s darker as has become typical of Sabayon, so it’s easy on the eyes, and for those that love the color blue, this should be right up your alley. By comparison, the GNOME desktop looks extremely similar, and even better in my opinion: 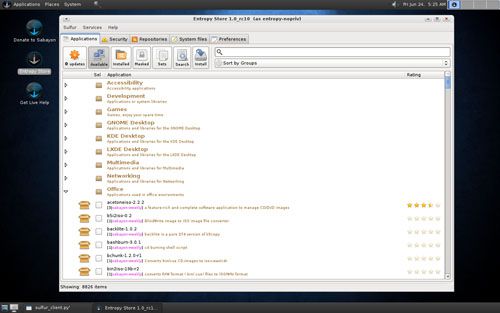 To get the job of installation done, Sabayon has adopted Fedora’s installer ‘Anaconda’, one I’ve had a love/hate relationship with. Compared to Ubuntu’s installer, Anaconda just isn’t as simple or enjoyable to use, especially when the time comes for partitioning. In fact, after spending about 15 minutes trying to properly configure the partitions to my liking with Anaconda, I gave up and loaded up KDE Partition Manager instead to get the layout I wanted, then go back to the installer and choose the proper mount points (for those interested in the specific issue, it had to do with Anaconda randomly deciding which partition would or would not be contained inside of the extended partition).

Aside from that, though, the installation went smoothly, and Jamie, who hasn’t installed Linux in a while, seemed to agree. For those who want to use a cutting-edge and very feature-packed file system, Sabayon offers a Btrfs option during the install. If you want any of your drives to use Btrfs aside from just the root, you can format them using this tool, and you may want to as the KDE Partition Manager post-install doesn’t have a Btrfs option.

While the install went well, the post-install did leave a bit to be desired. After installing the distro to my laptop, I didn’t encounter a show-stopping issue – though under KDE, the Entropy Store will not open, for whatever reason (it does under GNOME). Jamie’s experience, however, was far more alarming. Whether it be his configuration or just bad luck, his mouse and keyboard didn’t function as they should have. Some elements of the OS were impossible to click, and most often, only the taskbar would be clickable with the mouse, nothing else. 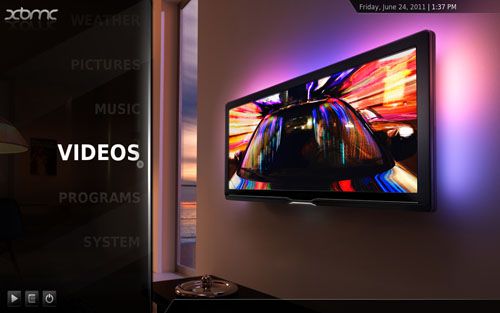 After searching around the Web for a potential fix, one recommendation noted potential issues with KDE gestures, which he promptly tried to disable. However, that led to another problem that even I was able to replicate on my laptop. In the System Settings for KDE, there’s virtually no control to be had without a mouse. Though there are many rows of icons, the selection would never escape the first one, nor would the Tab button to switch elements do anything at all.

In my Gentoo install, featuring KDE 4.6.3, I was able to do everything Sabayon wouldn’t allow me. I could explore all of the icons in this list and also use Tab to switch elements. What could possibly cause this problem? I’m not sure, but as mentioned, it isn’t a one-off issue.

At the same time, my own install didn’t instill too much confidence. After installing GNOME, I found Russian text inside of the Session Type menu, which is in all regards strange. While only an aesthetic problem, it’s the kind of problem that makes you wonder how much attention has been paid to the finer details. The fact that Entropy simply would not work under my freshly-installed KDE environment was also baffling, given it worked fine under GNOME.

Sabayon 6 was my first foray into testing out the Entropy package manager though, and I do have to say that its command-line component, equo, is quite nice. It’s not a far stretch from Gentoo’s Portage/emerge on the surface, but the structure is much nicer, as is the information given and the color-coding. I used equo to install gnome-light and related packages, and it went off without a hitch. Plus, unlike Gentoo, packages installed with equo didn’t have to be compiled first, which is a definite plus.

When all said and done, I am not sure what to think of Sabayon 6 at the moment. It’s the first distro in a while where I ran into so many strange happenings (I didn’t mention them all, for the sake of this remaining a ‘quick look’), and for that reason, I have currently lost interest in trying it out further. After a couple of days, I may install it to my desktop PC and see if I encounter any of the same problems, but after recently toying around with Pinguy OS 11.04 and not running into a single issue, all of these experienced with Sabayon leave a bad taste in my mouth.

If anyone out there has taken Sabayon 6 for a spin and hasn’t encountered any real issues, please feel free to post in our related thread and let us know about it. I quickly installed the OS to one of our benchmarking PCs and didn’t encounter any of the same bugs right off the bat, so it could be that Jamie has the perfect PC configuration that welcomes Linux problems and that Sabayon just doesn’t like my laptop for some reason. But a 1/3 success rate isn’t enough for me to recommend the distro to others.