AMD has today launched both its newest Ryzen 3 desktop processors, as well as its mobile line of Zen 2-based Ryzen Pro 4000 for mobile. We first wrote about the new Ryzen 3 chips a couple of weeks ago, so they’ve been no secret. Today, the cheapest Zen 2 option becomes the Ryzen 3 3100, a quad-core SMT-enabled chip. The other is the 3300X, sporting a clock bump, different internal design, and a price tag of twenty dollars more.

We mentioned above that the 3300X has a different internal design than the 3100, and that’s worth elaborating on a bit. We’re not sure of the true reasoning behind it, but the 3300X sources all of its cores from the same CCX module, whereas the 3100 sources them from two different CCXs. This effectively means that the 3300X will have better latencies, not just a higher clock speed out-of-the-gate. That could prove beneficial for gaming and other workloads, but it’d require some specific equal-clock testing between the two processors (something we’ll explore later). 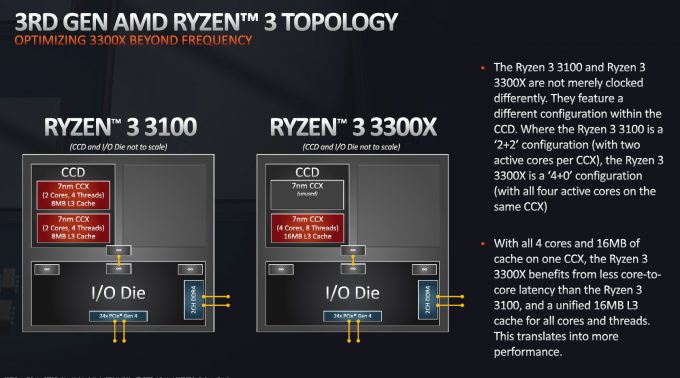 We’re still working on testing these chips, and will deliver a review next week. We just updated our CPU suite to reflect the most up-to-date software, and will test the entire Zen 2 non-Threadripper stack, as well as our lone current-gen Intel Core i9. We’ll get the big boy chips, Core X and Threadripper, tested in advance of the tenth-gen Core launch from Intel in the weeks ahead. In the meantime, you can check out reviews from our friends at AnandTech and HotHardware.

This CPU launch accompanies the launch of the B550 chipset, which brings top-end features like PCIe 4.0 to a more palatable price point. We’ll explore this chipset more in our review, but it is important to note that these new B550 boards will almost certainly not accept the APUs of old, even including the 3400G. This is because BIOS storage is limited on these platforms, and there has to be a point when legacy code should be replaced with more modern support.

The X570 chipset continues to offer full support for these products, since there’s more room to store in the ROM, but the still-existing B450 series would be your best bet if you want an APU. AMD says that B450 supply should continue to be strong for a while. Similarly, Zen 3 will require B550 or X570. That’s a bit unfortunate, but if there’s one upside, it’s that the CPU mounts will all remain in tact, so if you are still rocking the original Zen, you could swap out the board and chip, and continue on.

As for the Ryzen Pro launch, it follows in the footsteps of the Ryzen 4000 series launch that took place a couple of months ago, bringing forth Zen 2 to the business-oriented platform, complete with all of the security features workplaces demand. Compared to the top-end chips available from last generation, we’re seeing some massive boosts this go-around:

All three of these SKUs, versus the respective parts they’re replacing, offer twice the number of threads, and in some cases, more cores in general. The top-end chip bumps from 4 to 8 cores, while the middle makes the move from 4 to 6. Even the lowbie Ryzen 3 Pro 4450U gets a massive shot in the arm with the introduction of SMT to deliver a total of 8 threads. Meanwhile, top clock speeds have seen an improvement all-around, as well. 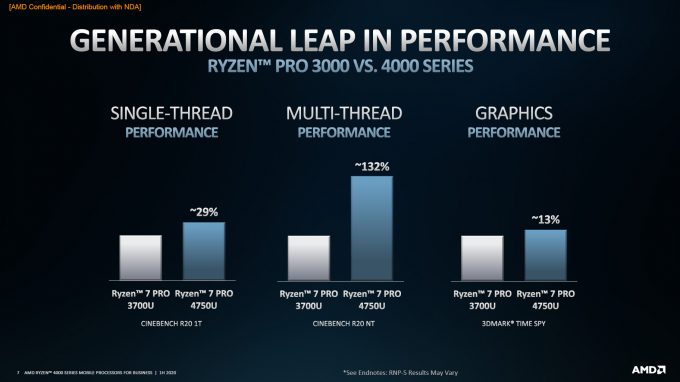 So far, HP and Lenovo have committed to a number of designs featuring these latest Ryzens, although at this point, we’re not quite sure what the starting price will be for the entry-level SKUs. On the security front, AMD reminds us that it has the goods to compete against Intel’s vPro feature set, with advanced management tools and the commitment to product availability of two years.

While desktop and mobile Ryzen have their own fleet of security features, the Ryzen Pro series enables the unique Memory Guard feature, keeping all data encrypted in memory, so that if any of it manages to be sniffed out, it won’t be useful to a malicious user.

These new Ryzen Pro chips are effectively launched, so if you want to scout one out, you can start stalking your favorite etailer, or bug your favorite IT person.