We wrote earlier of AMD’s new Radeon Pro VII, effectively its most powerful workstation graphics card ever. As cool as that launch may be, though, it isn’t the only thing AMD has going on today. For users of Radeon Pro graphics cards, there’s a new 20.Q2 Enterprise driver download to go snag, and if you’re a Radeon ProRender user, you may just have a second update to jump on.

There doesn’t seem to be too much that’s been added to this latest driver outside of a few bug fixes, but we’d imagine there are some general improvements to stability made as well. If you’re using the previous driver, you may not feel compelled enough to upgrade until the next release. One note: anyone who uses SolidWorks on a Dell Precision 3540 notebook with Radeon Pro WX 2100 will see stability improved. 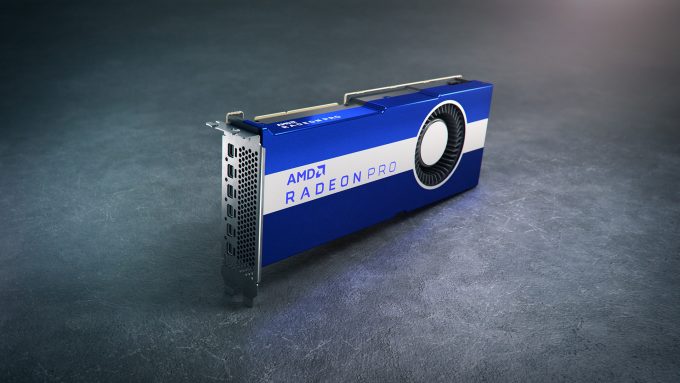 On the Radeon ProRender side of things, AMD has rolled out some significant updates, including the introduction of an experimental version of ProRender 2.0 to the Blender and Maya plugins. AMD doesn’t expect anyone to use this as a production render right now, but if you’re already using ProRender, seeing how well it works for you will be as simple as enabling the mode, and disabling it if it doesn’t jive.

What you can expect to see in 2.0 is a new shader node system, out-of-core heavy geometry support, and improvements to the overall rendering engine that gives performance a boost. That’s especially the case if you want to invite your CPU to come over and play, since AMD fully supports heterogeneous rendering to both processors. 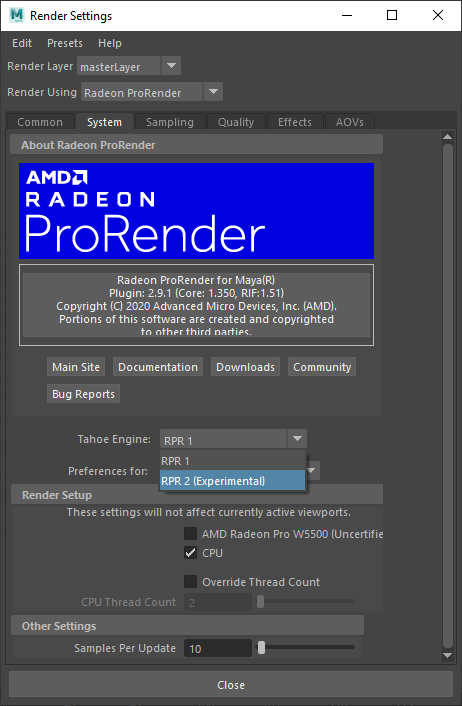 AMD’s Radeon Rays library has also seen a massive update today, with Metal and DirectX 12 support introduced, and a vow of continued support for Vulkan. With this version, OpenCL support has been deprecated, but users can still download the old Radeon Rays 2.0 library if needed.

AMD is pretty eager to get ProRender integrated into more software, so it’s also overhauled the SDK licensing, opting for the permissive Apache License 2.0. While ProRender is currently supported in a wide-range of design suites, it’s natively integrated into Cinema 4D, InstaLOD, Modo, Edificius, SolidWorks Visualize, and Z-Emotion. Users of 3ds Max, Maya, Houdini, Creo, or Unreal Engine (which also gets a ProRender update today) can install a plugin to quickly get up-and-running.

All of this Radeon Pro news follows major updates to the GPUOpen website released earlier this week, as well as the introduction of four new FidelityFX features: Stochastic Screen Space Reflections, Combined Adaptive Compute Ambient Occlusion, Luminance Preserving Mapper, and Single Pass Downsampler. As a reminder, AMD will be launching a slew of videos to the GPUOpen website this Friday, should you want to explore what AMD graphics tech can do for you, or see what’s on the horizon.