Considering the fact that AMD itself said its latest chips would be releasing this month, we’ve known that it was only a matter of time before we’d learn about actual dates, and finally, the company has revealed all of that today – along with a surprise or two.

At its price point, the 3950X is going to be attractive to any creator. The thought of 32 threads under $1,000 is simply impressive, especially when you consider that Intel’s 20-thread 6950X cost $1,700 just three years ago. And now we have an 18-core from Intel coming this month for under $1,000. The CPU market got a serious boost after the release of AMD’s original Zen, and the effects from its launch are still being seen. It actually feels weird to see Intel CPUs priced so competitively, and that really says something. 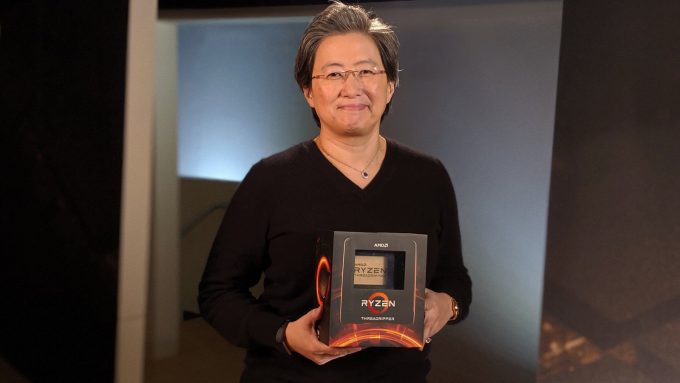 But what if you want moar power!!!? Well, AMD has Threadripper for that, and is debuting two models later this month with 24- and 32-cores. Those are called the 3960X and 3970X, respectively. If you look close at the pricing, you’ll notice something pretty interesting has happened between this year and last. 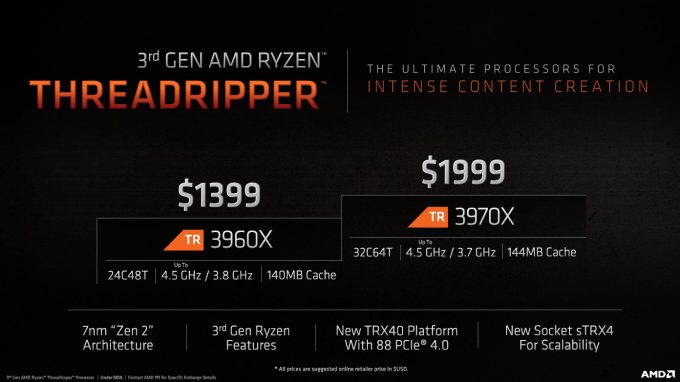 It’s important to note that AMD hasn’t talked at all about models beyond these initial two, although it’s expected that we’ll see at least a 64-core model be revealed at some point later. The rumormill can’t decide whether or not Threadripper third-gen is going to feature a 48-core. For all we know, the company may not release either a 48-core or 64-core at all. We will have to wait and see.

It’s important to note that this new Threadripper series requires a new socket because of all the design changes made. This also is atypical of AMD, but a required move in this case. We can hope that with the new TRX40 out, it’ll become the base for a few generations. 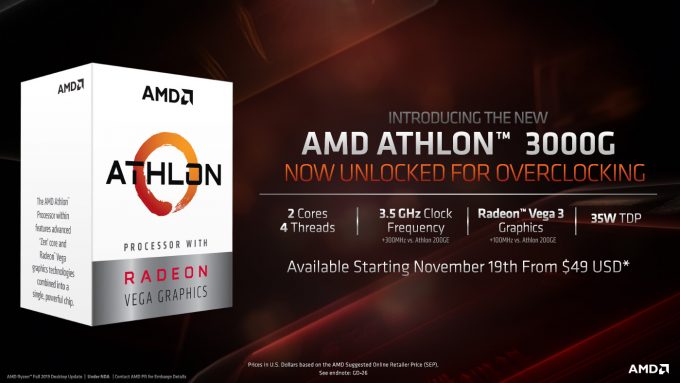 For something a little different, AMD has also unveiled the Athlon 3000G, a new APU that’s set to cost just $49. This is a two-core four-thread chip that apparently offers a faster internal GPU than the Athlon 200GE, released last year (by +100MHz). This modest chip has a 35W TDP, and could be useful as a base for an HTPC, or simple server of any kind. Interestingly, this chip is “unlocked for overclocking”, so let’s see how long it takes someone to put this $49 chip under some liquid nitrogen.

We will have reviews later this month for a bunch of these chips, so stay tuned for our in-depth performance reports (which will feature many new versions of software). Both the 3950X and two Threadripper chips are set to hit the market on November 25, but the 3000G will become available nearly a week earlier, on November 19.