With Blender 2.8’s release right around the corner, excitement is high, and so too are the number of questions about “When’s the final going to drop?!” Well, it’s coming soon, but the Blender Foundation doesn’t want to be hasty and push something out that’s less than ideal, especially when it’d take only a short bit longer to really nail things down.

During yesterday’s Blender Today YouTube stream, Blender’s original developer Ton Roosendaal paid a visit and filled the community in on a lot of what’s coming. First and foremost, the most important thing to note is that an RC2 release is coming, as a direct result of an outpouring of bug reports that rolled in during the original RC.

With 2.8’s release happening this month, the timing is good. SIGGRAPH is happening soon (we will not be attending this year, unfortunately!), and Blender is going to be on-hand talking about all that’s new. We saw quite a bit of Blender at last year’s event, so we can only imagine the presence now that 2.8 will be a final release.

With 2.8 being such a massive release, it’s been often asked why it’s not being called 3.0, and that’s a question Ton directly covers on Blender Today. His reasoning is simple: the new release has been called 2.8 for ages, so to rename it now would be nothing more than a publicity stunt. That said, the next major release will definitely adhere to the 3.0 version number. 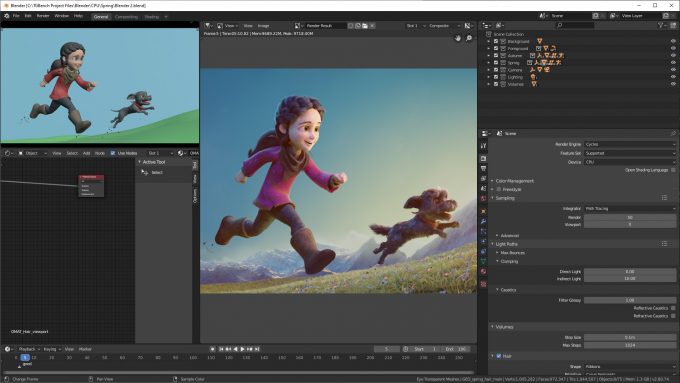 Ton also let it slip that some NVIDIA RTX-related news would be discussed at the event, which would follow hints dropped last year after NVIDIA’s RTX announcement. We’ve been told for a while that RTX support would be coming, but we’ve never been told what exactly it would entail. Since Blender already supports the GeForce Turing architecture itself no problem, we’d have to imagine support for NVIDIA’s RT Cores is what’s going to be announced, since the Tensor cores don’t improve rendering except for AI-assisted de-noising (unless Blender adds support for both features).

A couple of months ago, we tackled performance through an earlier 2.8 beta with both renders and viewport performance, and we’ll of course be doing the same thing now that 2.8 has reached RC status. We’re already in the middle of testing for that, as well as the usual workstation gauntlet, using both AMD’s Radeon RX 5700 series cards, and also NVIDIA’s GeForce SUPERs (along with a few extras for good measure). You can expect a wealth of performance information on this next week.

In the meantime, if you are a Blender user, you should jump into the RC, and report any bugs you may find (of course looking first to make sure they’re not already known about). Because so much is being changed at the last-minute, albeit minor, we’ll do some sanity testing once the actual final drops and see if there is any differences between it and the RC (highly unlikely), and then we’ll get the performance look out the door.

On a similar note, we tested out the 2.8 splash screen scene, which has now been made available. We planned to use it in our testing, but the render takes about one minute to do pre-processing working before the actual render takes place, so we’re skipping over it for now until we can figure out a definitively accurate way to test. You should still check it out if you want to see what a proper from-the-ground-up 2.8 project looks like!