We wrote last week that Microsoft’s new Flight Simulator release has taken off in a really big way. The reviews up to this point paint a favorable picture of the new game (or should we call it a simulator?), and after having played it ourselves, we totally get why. The game is captivating, due to its realistic representation of the earth, and obviously, the realistic physics and aircraft characteristics.

If you’ve played the new Flight Simulator yourself, you’re probably aware that things are not exactly perfect right now. In all of our “testing” (read: playing), we experienced the game crashing to the desktop on a handful of occasions, and beyond that, the frame rate we see on certain configurations doesn’t seem to add up. In effect, hitting 60 FPS at a higher resolution, like 3440×1440 or 4K, will not happen if you plan to use a top-end GPU and top-end graphics settings.

That’s no doubt part of the reason Jon Peddie Research sees such enormous potential with regards to future PC hardware sales made as a direct result of this game. Flight simulators have long been showcases for pushing PC hardware – not just the GPU, but also the CPU. We used Flight Simulator X way back in 2008 to test Intel’s eight-core Skulltrail platform. Today, you’d imagine the potential to effectively use modern hardware would be even greater. 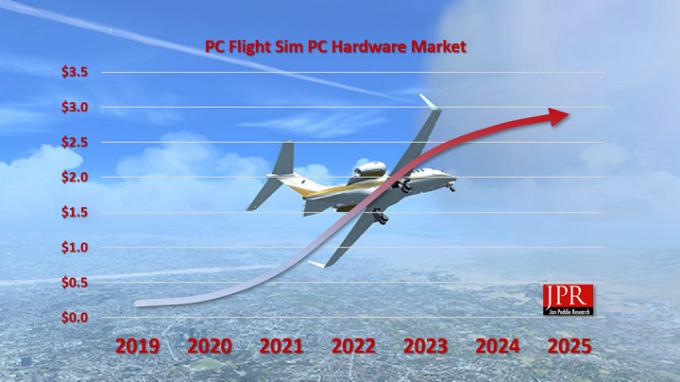 JPR suggests that Flight Simulator 2020 is poised to sell 2.27 million copies over the next three years, and as a result of that, $2.6 billion (over 4 years) will be fueled into hardware that will improve the frame rate – and experience – for those gamers. With this new flight sim set to add VR support in the future, we’re already picturing the monstrous rigs this title might be able to take advantage of.

That all said, as alluded to above, the current state of the game isn’t ideal. In fact, in many ways, what we see right now is really disappointing, considering Microsoft both develops this Flight Simulator, and the operating system it runs inside of. Yet, we still have bizarre design cues such as the downloader / launcher using the entire GPU while it spends multiple hours downloading the game (slower than it ever should on a given connection), and that it’s built around DX11. Think about that: A Microsoft game released in 2020 built around DX11, when the company itself is responsible for the much more efficient (and capable) DX12.

Clearly, there’s a lot of optimization that needs to hit Flight Simulator, and so far, it does appear the developer is keen on fixing things up as soon as possible – which includes the eventual launch of an upgraded DX12-equipped client. Given all of this, the game is not quite ready for prime-time benchmarking, but we hope that will change in the future.