NVIDIA Brings Its RTX Tech To Linux On Arm

When NVIDIA sets out to acquire a company, it doesn’t seem to waste any time to start producing custom product with the new IP access. After the company announced its plans to acquire Arm last fall, the company announced a full-fledged Arm-based supercomputer called Grace this past spring. Arm in the enterprise seemed likely, but did you expect to see the label “RTX” tied in with it, as well? 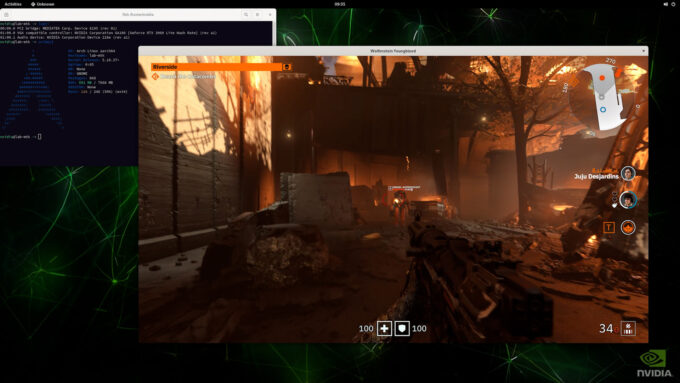 At the ongoing Game Developers Conference, NVIDIA announced that it’s bringing RTX to Arm on Linux, which should result in a number of different types of devices adopting it. With the help of two tech demos, the company utilized MediaTek’s Kompanio 120 (eight-core with 1-3-4 config) and gave it a GeForce RTX 3060 to work with. With one demo, the fast-paced Wolfenstein: Youngblood was shown-off, utilizing both ray tracing and DLSS. You can check it running in real-time in the video below:

The second tech demo to feature Arm + RTX is also seen in the above video. Called The Bistro, we originally saw this scene a few years ago during SIGGRAPH, as NVIDIA used it to show off the possibilities with its accelerated denoising. At the time, that demo was running on a seriously powerful rig – one with more than a single GPU, if we recall correctly. Today, the same demo is being shown off on an Arm rig with lower-end GeForce graphics.

“Lower-end” might be the wrong way to label an RTX 3060, even if it’s the bottom of the current Ampere lineup, however. With this announcement, NVIDIA seems to target automobiles, as well as notebooks.

The demos shown-off utilize these libraries:

Both RTXGI and DLSS for Arm will be released soon, but RTXDI, NRD, and RTXMU SDKs are available right now. While Arch Linux is seen in the tech demo, NVIDIA notes these technologies will also support Chromium.

This announcement has our mind wandering to different possibilities. This is a long shot, but if RTX will support Arm, could it be possible that Apple, with its Arm-based M1, may want to expand support beyond only Radeon graphics? We said this was a “long shot”, and we really mean it, since Apple seems to be purposely avoiding using NVIDIA’s GPUs at all costs – perhaps due to spite. That’s unfortunate, since for creator workloads, especially rendering, RTX can’t be beat, so to not offer it seems like a disservice to its customers.

We also can’t help but think about the recently announced Valve Steam Deck. While AMD APUs will be shipping with the Deck, it remains an open platform, allowing other companies to build their own such devices. Perhaps in time, we’ll see Arm + NVIDIA versions of the Steam deck, assuming compatibility won’t be an issue. Compatibility will be super important, since it’s Valve’s hope that the Steam Deck will run every single game available on Steam – even those with anti-cheat mechanisms.

This could get pretty interesting!