At its ongoing GTC, NVIDIA’s revealed many new products and technologies revolving around AI and deep-learning, such as the flagship AI GPU, H100, built around the Hopper architecture. While AI’s dominated the show, it’s not been the only focus. NVIDIA has also catered to creators in multiple ways, including a launch of a handful of new workstation GPUs, as well as a new Studio driver, bundling in a number of workload optimizations. 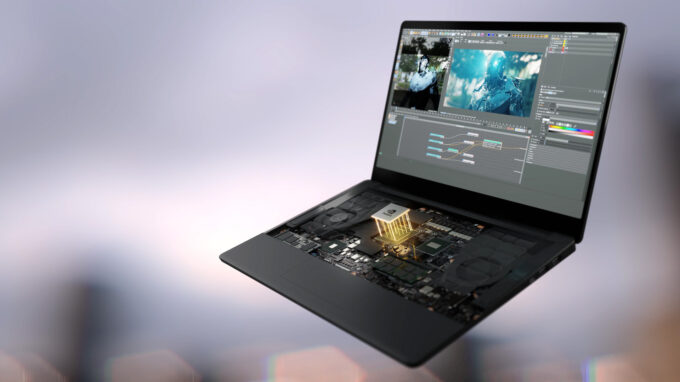 On the mobile GPU front, NVIDIA’s refreshing a few of its previously-released options, while added a couple of new ones. The new flagship is the RTX A5500, sporting 7,424 cores, and delivering peak FP32 performance of 24.7 TFLOPS. Both the A5500 and A4500 include 16GB of ECC-capable memory, and improve bandwidth over the previous models to 512GB/s. A new entry-level option has been added by way of the RTX A500, a low-power version of the A1000.

It’s interesting that NVIDIA still considers Turing to be part of its current lineup, as for creators, the move to an RTX card will offer huge benefit to the many workloads that can tap into its features – especially rendering. All of these GPUS support SM 7.0 and OpenGL 4.6, while only the RTX cards support DirectX 12 Ultimate.

For desktop, NVIDIA also announced a new high-end option: RTX A5500. This GPU shares many specs with the A5000, but piles on additional cores for increased performance. This new GPU slides right on under the RTX A6000, which itself bolsters performance further, as well as doubles the frame buffer size.

If you’re already happy with your NVIDIA setup, you may still be interested in the latest Studio driver, versioned 512.15. This driver adds official support for Blender 3.1 (performance seems unchanged in our quick testing, vs. the previous driver), Luxion’s new KeyShot 11, and GPU Audio Inc. If you’re an Omniverse user, you’ll definitely want to snag this latest driver, as it adds support for the latest platform updates.

In one of its many GTC-related blog posts, NVIDIA shares the above performance graph, highlighting how much faster its RTX GPUs can tear through rendering workloads, in comparison to Apple’s M1 Max. That’s not a comparison we expected to see, but it’s an interesting one. With Blender having only just added support for M1, we’re interested to see how the performance will look as further optimizations trickle out.

On a similar note, we’re thankful that the latest Studio driver hasn’t impacted Blender performance, as we recently completed our full 3.1 testing (phew). We’ll be publishing our usual full performance look for that in the days ahead.