Late last week, and as we expected, the much-hyped Warehouse demo for Tony Hawk’s Pro Skater 1+2 released – but only to those who’ve preordered the game. That part is unfortunate, but if there’s any consolation in not being able to access the demo, it’s the fact that there are no goals to accomplish – it’s just a 2-minute free-run for you to goof around in.

Being a fan of the THPS series, I couldn’t wait to jump into this demo and see how this classic has been pushed forward to the current generation of gaming. It might be worth mentioning that 1+2 isn’t the first THPS remake we’ve seen. In 2012, we saw the release of Tony Hawk’s Pro Skater HD, and while that game had its own charm, it really didn’t feel like a proper remake. This 1+2 release absolutely does.

These screenshots can’t really do the game much justice, but we can say that playing Tony Hawk at a silky-smooth 60 FPS+ is really satisfying, as is the ability to crank the field-of-view. The shots above help highlight the fact that ultrawide resolution is fully supported, and when maxing out the FOV (90), you really do get a great view of the level.

From a control perspective, this 1+2 demo really felt spot-on. While there are new moves not seen in the original Tony Hawk releases, it’s pretty much integral that they’ve made an appearance here. That even includes the ability to jump at a wall and bounce back off it so that you can continue your huge combo.

The biggest downside of this particular demo is that there’s no goals to complete. That said, anyone who’s played in the Warehouse level in the past likely knows what to expect from the goals already. It’s likely that Activision didn’t want people to get bored of this freebie level before the full game comes out, so there’s something fresh to do once someone jumps into the full game.

Here’s a look at the game’s graphics options: 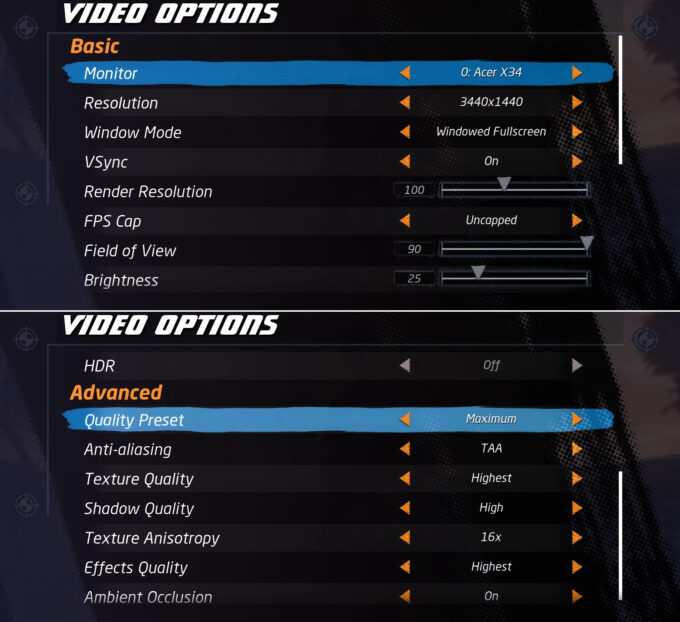 An option that apparently got lobbed off in the above screenshot is AMD FidelityFX sharpening. That and the inclusion of HDR is great to see, and we can only hope that the latter is one of the better implementations, as it’s not often enough that we hear about people being blown-away by great HDR.

THPS 1+2 is due out on September 4, and if you are interested in checking out this Warehouse demo, you will need to preorder. We wouldn’t suggest rushing to preorder unless you plan to purchase anyway, as the demo is obviously light in content. We’re already stoked at the thought of seeing a full game of these remade levels, though, since there are many from the original two games that almost feel iconic at this point.