From what started as a request for play testers over on reddit, Richard Cowgill of Sunside Games managed to get the backing of NVIDIA’s marketing team and an Early Access launch for his latest game, all in less than a month (of the reddit post). Stay in the Light is a first-person horror title that means business when it comes to graphics, requiring NVIDIA’s RTX technology to play.

Richard Cowgill only started work on this project in April, when NVIDIA flipped the switch to allow ray tracing to be performed on its Pascal series GPUs. Starting out with a GTX 1080 Ti, he built up a procedurally generated dungeon horror game where lighting, shadows, and reflections play a key part in staying alive.

You are being hunted by ‘Him’, while you scuttle around trying to find treasure, and eventually leave the dungeon. All you have to help is some chalk, torches, and a mirror. It’s the mix of dreary lighting that hides and unveils paths to follow, and a mirror that allows you to see perfectly what’s behind you.

Built using Unreal 4, Stay in the Light will showcase what a game can do with RTX at the forefront of its design, rather than as graphical icing on a cake. It will not require an NVIDIA 20-series card in order to play, as any GPUs with RTX support will work, even as low as a GTX 1060 should be enough – at least, when the game is done. 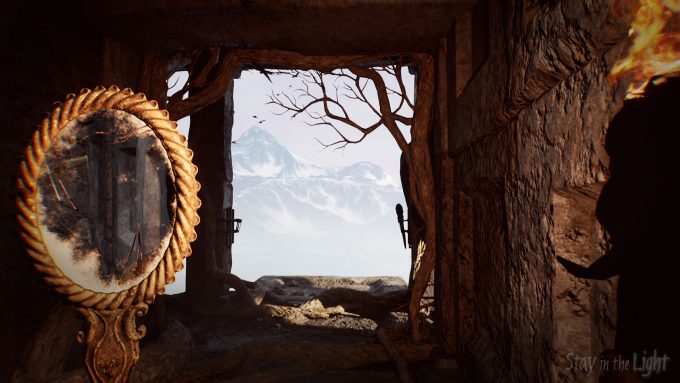 Early Access on Steam does have a bit of a poor reputation these days, but considering what Richard has thrown together in just a few months, it’s impressive to say the least. Then again, he’s a pro that’s worked on titles such as Borderlands and Battlefield. It’s still work in progress, and likely to be buggy, but much of the core functionality is there. It’ll be exciting to see where this leads.

Stay in the Light will join a small group of games that make use of RTX, including Battlefield V, Shadow of the Tomb Raider, Metro Exodus, and more recently the remake of Quake II RTX, and Wolfenstein Youngblood which is due out soon.