It has been quite the year for Ubisoft, but as far as many gamers are concerned, it’s not been for good reason. This is especially true when it comes to the PC. Given some of the stunts we’ve seen pulled this past year, we’ve truly had to ask ourselves why Ubisoft seems to hate the PC as a platform so much. It could be that we’re jumping to conclusions – maybe the company doesn’t hate the PC. It just has an uncanny knack for exercising bad judgment just to get a game out the door. 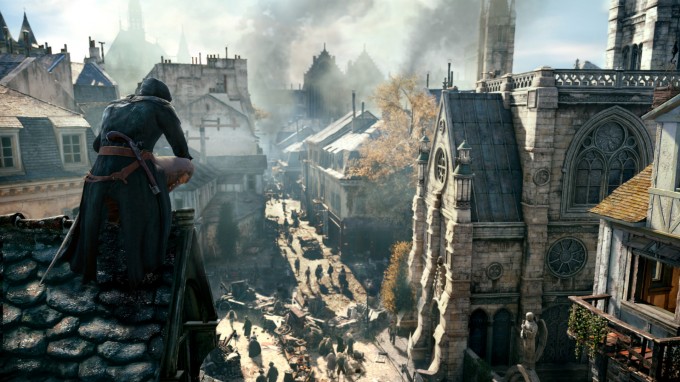 One of the Web’s hottest topics at the moment is Assassin’s Creed Unity and its failure to be what it was supposed to be. It’s not terribly unexpected that a game will launch with a few bugs, but in ACU, they’re impossible to avoid – even mere minutes into the game. On launch day, I loaded the game up only to have it crash on me after I changed the graphics settings. To be fair, that can happen on rare occasion. Then I started my quest, and things seemed to go well. Then an NPC fell through the road. I couldn’t help but laugh, but it was then that I decided I’d hold off before putting more time into playing it (much less decide whether I’d use it for our GPU benchmarking).

Later that night, I noticed people on reddit complaining about the game’s poor graphics. Admittedly, this isn’t something that stood out to me – the graphics looked fine when I played. As it turns out, though, I simply didn’t play the game enough, nor did I scale to the highest rooftops to take in the sights. So, I loaded the game back up, and did just that. 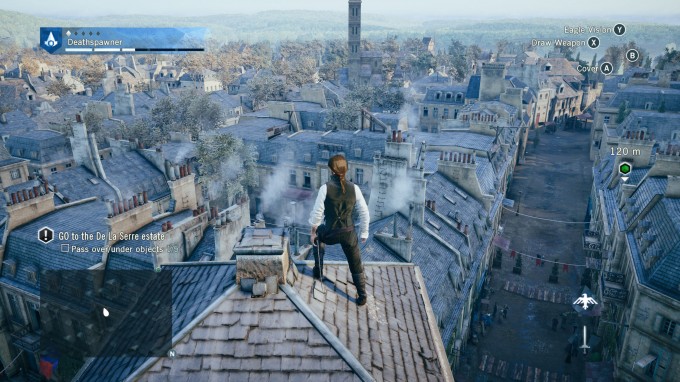 For the most part, the game looks fine. But it doesn’t take too much effort to scan the scene and spot some major issues. At only a couple of houses away do the textures begin to degrade. Clear windows suddenly become a gross, flat texture. Even the trees don’t have that much definition. If the entire scene looked as good as everything near me, I wouldn’t complain too much – but even then it leaves a bit to be desired. It’s like there’s this blueish haze over everything. And that’s with the game at its highest detail settings.

Then there’s the issue of performance. I love it when a new game comes out that’s so graphically demanding, it makes even the highest-end graphics cards weep. ACU manages to make the latter happen, but it doesn’t do it by bringing incredible graphics to the table. Making matters worse, I wasn’t able to tweak my settings before entering the game, and that’s something that had to be done, because the default choice of MSAA and SSAO was too much. Using the Very High preset and disabling SSAO and moving MSAA to FXAA gave me 50 FPS @ 1440p using a GTX 980, and 70 FPS @ 1080p. That’s fair enough if the game looks great. While a lot of the game does look good, it’s clear from the screenshot above that the game’s optimization is horrible.

It’d be easy to chalk this all up as being a launch issue – something that will be patched in the near-future. But these issues are not unique to Ubisoft. Earlier this year, the company’s Watch Dogs suffered much of the same issues. It had poor performance, and worse still, its graphics didn’t match the high-quality seen at the E3 prior. Some would call this a bait and switch, and I guess I couldn’t disagree. I had huge hopes for that game in particular, but with all of the issues that plagued it, I ended up passing it on by. 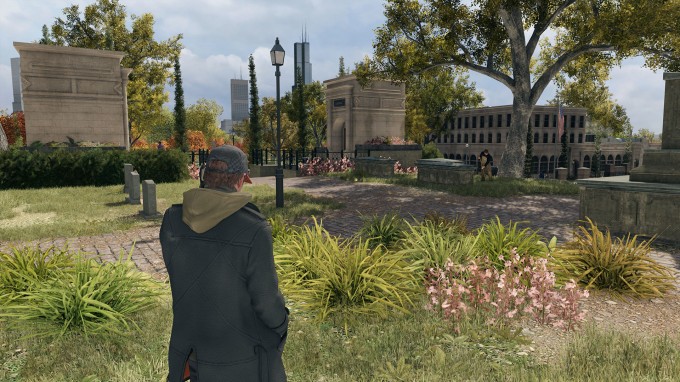 Even before ACU‘s release, Ubisoft had plans to keep the game locked to 30 FPS because it offers a more “cinematic” experience. Well, I don’t know about you, but I don’t play games to watch a movie – I want good framerates, and fluid gameplay. It’s why I like to use high-end components. But in the past month, an Ubisoft employee came forward and said that the quest for 60 FPS is overblown – they actually said that it feels better. Oy.

I’ve been a fan of Ubisoft for nearly twenty years, ever since I laid my eyes on the first Rayman title. With Watch Dogs earlier this year, I just tried to believe that the company didn’t mean for those launch hassles to happen and thus wouldn’t let it happen again. I’ve made excuses for the company because there are so many past Ubisoft titles that fill me with nostalgia. After ACU, though, it’s really hard to defend what the company’s doing.

Heck – it’s been hard to defend the company for a while now. Way back in 2010, I outright said to skip over Assassin’s Creed II due to its ridiculous DRM. What sucked about that is that AC2 was a good game, much like From Dust was a year later. I thoroughly enjoyed that title as well, but couldn’t wrap up my quick look without warning about the game’s always-on DRM.

If there’s one good thing to come from all of this, it’s that Ubisoft’s stock dropped about a dollar since ACU‘s release. While I don’t get any joy out of seeing a company lose money, there really seems to be no better way to clue them in. It’s unfortunate it has to come to that, and it really helps us appreciate those developers / publishers that do actually care enough about their customers to make changes where they’re needed. CD PROJEKT RED is a good recent example of this. Not only has the company proven time and time again that it wants to cater to the gamer more than itself, it even recently announced that all DLC for The Witcher 3: Wild Hunt will cost players nothing.

I read somewhere yesterday that Ubisoft is gearing itself up to be the next EA, and that really couldn’t be more true. I really hope that the company changes its ways, because as has been evidenced by the stock hit, it’s not going to bode well if it continues along the same path. In the near-term, I hope titles like The Crew, Far Cry 4, and also Tom Clancy’s The Division don’t suffer the same fate as ACU.