Ahead of AMD’s Zen launch in early 2017, enthusiasts were clamoring for exciting progress in the desktop CPU market. While we saw GPUs gain tremendously from one generation to the next, every CPU release seemed truly modest in comparison, with 5~10% per-core performance boosts, and most features catering more to the server market than the desktop one.

With that original Zen launch, AMD gave people a reason to pay close attention to desktop processors again, and while it took a couple of years to deliver a proper strike back, Intel’s definitely a force to be reckoned with nowadays, with its 12th-gen Core series delivering extremely competitive performance.

AMD and Intel have clearly been enjoying the challenges of figuring out where to take our CPUs next. Intel’s Alder Lake architecture introduced efficient cores to sit alongside performance ones, and ultimately, it’s a design that’s paid-off well for the company. On the AMD side, with its Zen 4 architecture still a little ways off, the company couldn’t bear to wait longer before unveiling its latest technology: 3D V-Cache. 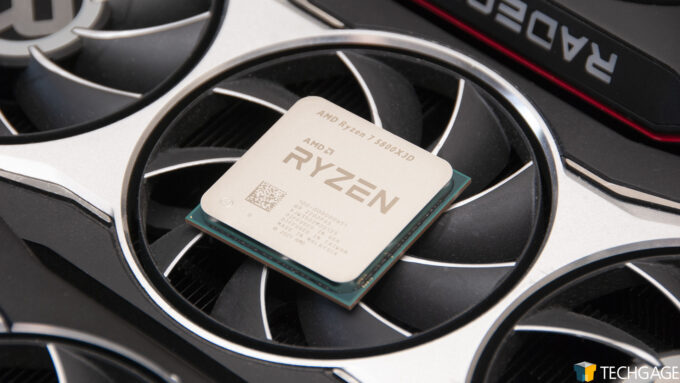 Put simply, 3D V-Cache is vertically-stacked cache that allows AMD to improve densities without expanding the CPU’s resulting die size. Stacking used in chip design isn’t a new concept, but AMD claims to deliver the best take on it yet, with many more interconnects sitting between each stacked chip, ensuring ultra-high bandwidth and ultra-low latency.

When we first learned of 3D V-Cache, it wasn’t immediately clear just how quickly it’d find itself in a desktop processor. The feature first debuted in the server-bound EPYC “Milan-X” series, and in appropriate workloads, the speed boosts can be truly notable. What about on desktop? Anticipating gains will prove to be a bit trickier.

For reasons that are obvious to us now, AMD’s primary marketing for the Ryzen 7 5800X is gaming, as the additional cache delivers improvements across many games and game engines. While most of the obvious benefit will be seen at lower resolutions, even higher resolutions can show a bit of a performance bump.

Because our primary focus at Techgage is on workstation performance, we felt compelled to begin our 5800X3D testing there. Unfortunately, as the performance results ahead will attest, we probably should have started with a gaming or Linux angle, because you need specific creator workloads to tap into the additional cache – something future software updates will hopefully make more common.

Nonetheless, we can follow-up with additional testing later. For now, let’s review AMD’s current-gen Ryzen lineup, as it stands after the introduction of the 5800X3D:

AMD’s current-gen 3D V-Cache technology triples the amount of available L3 cache. This represents a bump from 32MB to 96MB with the Ryzen 7 5800X3D, and a staggering jump from 256MB to 768MB on the server-bound Milan-X EPYCs.

As lightly touched on above, tripling the amount of cache isn’t going to automatically improve workloads across-the-board. The reason AMD touts this CPU as the world’s best gaming chip highlights that. If you do use workloads that can take advantage of a lot of cache, the performance uplift will be notable. On the creator side, you will have to try hard to find benefit, as our results in this article will also help highlight. This is why we’re really eager to get gaming and Linux testing done soon.

This article is going to be tackling creator workloads like image manipulation, video encoding, and rendering, and will also tackle detailed synthetics with the help of SiSoftware’s Sandra. On the following page, you can get up to speed with test system configurations and our methodologies; if you don’t care about that, simply head on over to page 3.