Page 1 – Introduction, A Look At The Hardware

It might be hard to believe, but Apple released the first iteration of its MacBook Air seven-and-a-half years ago. At the time, it didn’t take long to realize its impact. I’d wager that it single-handedly spawned the craze of making notebooks crazy thin. Apple proved that high-performance isn’t always necessary. Sometimes, portability and style are.

On the PC side of things, finding super-thin / portable notebooks isn’t challenging anymore, but it is admittedly rare to find one that matches the MacBook Air in terms of aesthetics. The situation has improved lot in recent years, however. This year in particular, Dell released its latest XPS 13, and ASUS launched its ZenBook UX305. I think both fit the bill of being a proper MacBook Air competitor.

The fact that you’re here reading this probably means that you know I’ll be taking a look at the latter notebook today. The UX305 came out in February, a month before Apple revealed its latest MacBook – one, you guessed it – aims to be super thin. Somewhat interestingly, ASUS has beat Apple in the thinness department – its UX305 is 12.3mm “thick”, while the latest MacBook is 13.1mm.

Not that any of that matters much. When we’re talking about notebooks this thin, you’d be hard-pressed to notice the shaving-off of another millimeter or two. From both a form-factor and performance standpoint though, ASUS’ UX305 takes on both the MacBook and Dell XPS 13, although it has one trick up its sleeve: it’s less expensive.

As with all of ASUS’ notebooks, there are multiple configurations of its UX305. The biggest differences between them relate to the storage and display resolution. This particular model I’m looking at, the UX305, includes a 256GB SSD and a 1080p display. Opting for the beefiest UX305 will net you 512GB of storage and a 3200×1800 display.

Being a 13.3-inch notebook, either the 1080p or 1800p resolutions are going to result in needing to use DPI scaling, else text and icons on the screen are going to look small. While this isn’t a workhorse notebook, it does have capable enough performance for normal productivity work, but I certainly wouldn’t plan on encoding or editing video with it (unless you have excellent patience, perhaps.) 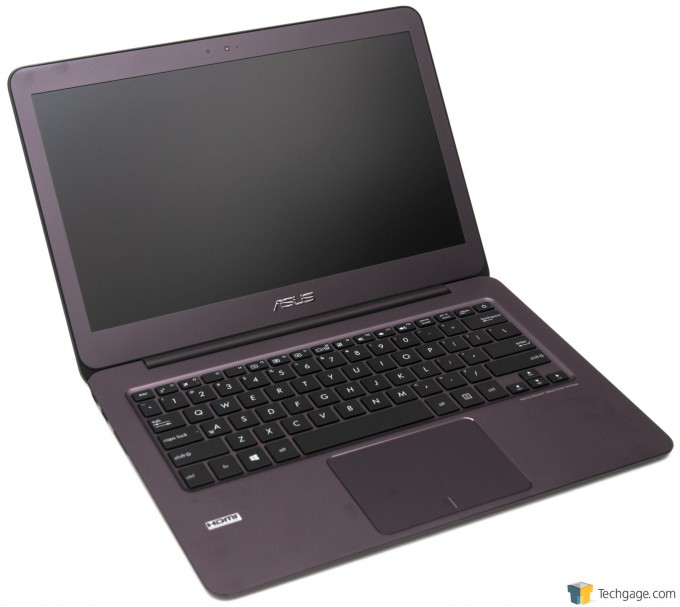 The color situation surrounding the UX305 is a bit odd. The model I received is a tinge of purple, and I believe that to be the most common one. At the top of this page, you can see that there are also beige, black, and white models. Most etail listings I’ve seen have shown the black model, but I was told that there is no black model sold in North America. That’s too bad, because the official product page highlights one – and it’s fantastic. The white model was available in NA, but it was just for a brief time. As for the beige, I can’t figure out where that comes in.

Long story short: the UX305 you buy will probably be an elegant shade of purple, not the colors seen in the top-most shot. If anyone confirms that the other colors are available for sale anywhere, I’d appreciate a heads-up. 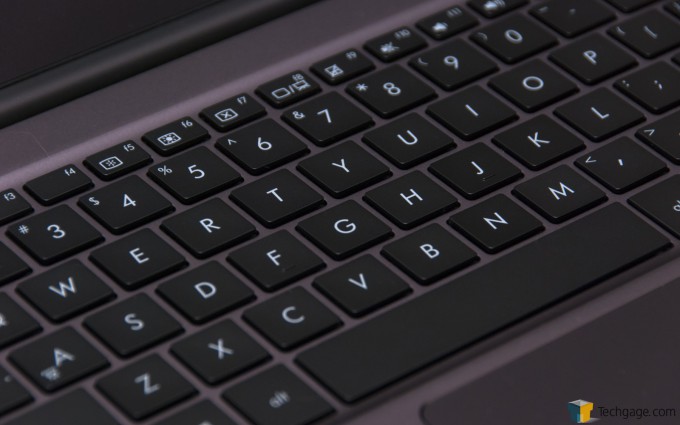 To give an idea of just how thin the UX305 is, here’s a shot showing its side in comparison to a cardboard music CD. They’re actually close to being the same thickness. It’s hard to appreciate through flat images, but the UX305 is thin, thin, thin. Likewise, it’s super-light, and definitely the most portable notebook I’ve ever used. It slips into any bag without issue – you’ll not even notice it, and it certainly won’t hog space. If you can fit a magazine into a bag, you can fit the UX305. 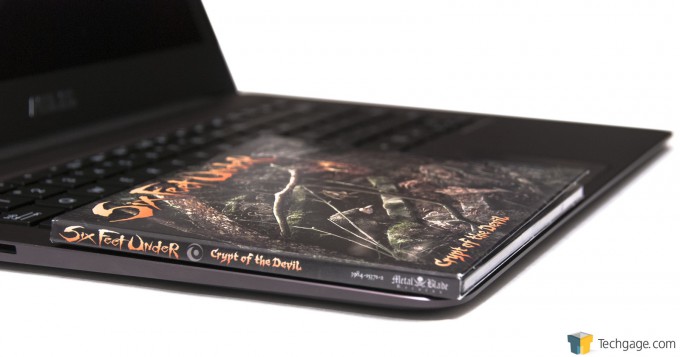 For connectivity, the UX305 offers 3x USB 3.0 ports, with two at the left side, and the other at the right. There’s also a card reader (SD/SDXC), a mini-HDMI connector, as well as audio out jack. The power port is found on the right side at the absolute back. 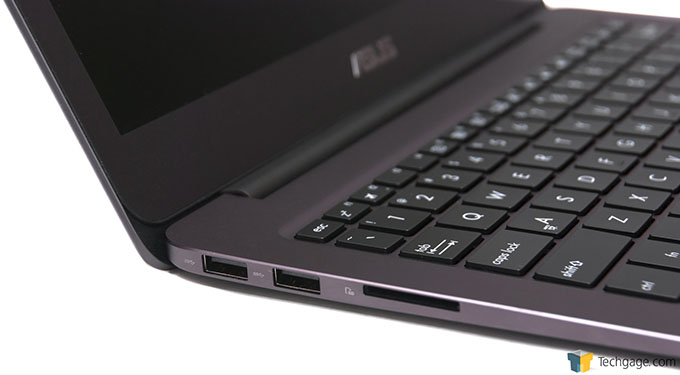 Despite the fact that Apple’s MacBook starts out at $500 more than this UX305, ASUS managed to pack in a 720p webcam, beating out the MacBook’s 480p. That said, most webcams included with notebooks are going to deliver modest quality at best. If you care a lot about delivering a clear image, you’ll want to opt for an after-market option.

Also worthy of note is the fact that the UX305 is too thin to have an Ethernet port. Kindly enough, ASUS includes a USB 3.0 Ethernet adapter in the box, saving you from having to splurge extra for one after-the-fact.

The UX305's keyboard and touchpad 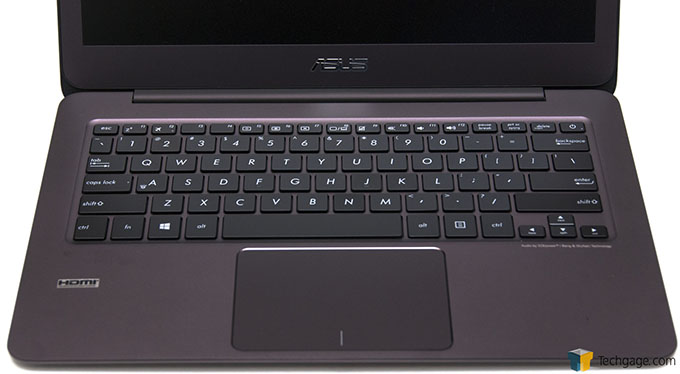 There's not too much to look at on the bottom

From a hardware standpoint, ASUS’ UX305 is just stellar. A super-thin notebook like this isn’t going to be for everyone, but for the business traveler, or those who have simpler needs while on-the-go, it’s fantastic. It’s thin enough to fit into a briefcase or backpack without getting in the way, and despite that, it feels extremely sturdy when closed.

Where the keyboard’s concerned, I have no complaints. The keys both look great and are great to type on. The only fault is one that can’t be helped: the lack of a numpad. One potential issue some might find with this keyboard though is that the notebook’s power button is located to the top-right – rather than it being a switch on the side. I thought at first that this might prove to be a nuisance, but after all of the use I’ve put this notebook through, I never once hit it by accident. Now, if it were located on the opposite corner, that’d be a definitive issue.

While the keyboard is great, the touchpad isn’t quite as excellent. Navigation wise, it’s good, but I find the buttons to be a little finicky, with me sometimes clicking by accident or not clicking accurately enough. In addition, I typically open folders by double tapping the touchpad, and on this notebook, I find that works only half of the time. I think part of the reason for these oddities is that the entire touchpad is clickable – it acts as a left click. Double-clicking this way doesn’t feel natural at all, though. Overall, no major complaints about the touchpad, but it could certainly be better.

And with that all covered, let’s tackle the software and other necessities.