Intel’s latest mid-range chipset might not be due out for another few weeks, but that hasn’t stopped both ASUS and Gigabyte from sending out early samples. The first board to hit our labs was ASUS’ P5Q Deluxe, a DDR2 offering.

What is Intel’s P45 all about, and should you care? As with many of Intel’s products lately, P45 is more of an evolutionary upgrade rather than a revolutionary one, but the benefits it offers can be well worth getting excited over.

While P35 and X38/48 were based on a 90nm process, P45 is based on 65nm. This will equate to (hopefully) better overall efficiency, and in the tests with this board, it seems like benefits can really be seen.

Other features include the upgrade to a 1600FSB, which right now has little value, as previous generation chipsets have had no problem hitting 400MHz FSB and beyond, nor do many people want the $1,500 QX9770 which is currently the only 1600MHz FSB CPU (aside from the Skulltrail QX9775). As time rolls on, however, Intel may re-release their 45nm mid-range products to support the higher FSB, so it will make sense to have them natively supported.

Also new is the ICH10 Southbridge, but right now, not much information is given as to the changes. In our I/O tests, the performance remained the same, but rumor has it that a few insignificant features were removed to keep power consumption down. Lastly, PCI-E 2.0 has been implemented, to mimic what we’ve seen from the past few months with X38.

At official launch, ASUS will release four P45-based boards, all of which are quite similar to one another. One is designed more for a workstation (P5Q-WS), while the other will be for budget-conscious consumers (P5Q-E). Then we have the P5Q and P5Q3 Deluxe, which are both similar in feature-sets, but use DDR2 or DDR3, respectively.

ASUS’ “Deluxe” boards have never been known as anything but feature-packed, and these new boards are no exception. Besides the usual combination of solid design and great looks, the P5Q introduces a few things worthy of note. 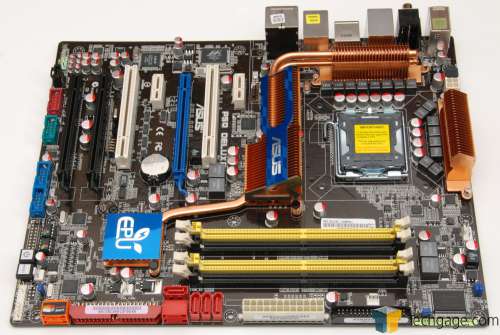 First and foremost, their EPU engine has been upgraded to be able to control even more of the voltage regulation on the board, for optimum power efficiency. This is paired with a new 16-phase power solution, which is argued to be more of an 8-phase solution underneath. I am not familiar enough with power schemes to verify this, but 16-phase does seem a little overboard.

The benefits of adding more phases is that it increases the stability of the power delivery, and in essence should also increase the overclocking-ability. However, as we’ll see later, the so-called 16-phase setup didn’t do much for us there.

As I mentioned in my DeviceVM Splashtop article a few weeks ago, going forward, ASUS will be including the embedded Linux environment on all of their motherboards. This is a huge win for Linux, and goes to show just how confident ASUS is in DeviceVM’s technology. So with this new roll out, an upgraded version has been pre-installed here, which improves on the original that we first saw on the P5E3 Deluxe late last year.

“Drive Xpert” is another major feature addition. It’s essentially a layman’s RAID setup, which is only a good thing. Because the instructions and terms used are presented in a manner that anyone can understand, it’s very easy to setup.

Overall, ASUS has one packed board on their hands, and from what I understand, the P5Q is set to retail for around $220. If true, it’s going to be a relative bargain.