If you’re a computer enthusiast, more than likely you have heard of DFI. Long known in the industry as an overclockers best friend in the motherboard arena, DFI has produced some of the best performing motherboards to date. Their LanParty series has catapulted them to the top tier of enthusiast motherboard manufacturers by offering superb performance and an ungodly amount of extras bundled. While the LanParty has garnered all of the accolades and attention, the Infinity series of motherboards has been around for those of us with somewhat restricting budgets.

Now that 2006 is almost behind us, looking back, it’s obvious that the CPU market is nothing like it was this time last year. Intel has retaken the performance crown from AMD, dual core CPUs are a common place and more importantly, affordable and the emergence of quad core CPUs is happening as well. The DFI Infinity 975 X/G, which we are working with today, uses the same 975 Intel chipset that has been around for a while now. Using this chipset, the 975 X/G is Core 2 Duo ready and with a BIOS upgrade, quad core ready as well. With the following that DFI has developed, there is a lot riding on this motherboard and in working with the 975 X/G over the past 4 weeks, we have been working with it to find out if it’s truly a board that the Core 2 Duo crown has been waiting for as well as if it’s a value to the consumer as the Infinity name implies. 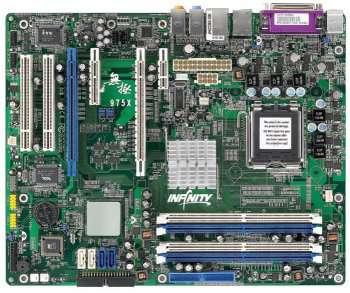 DFI clearly wants to distinguish their Infinity boards from the LanParty board that they have built their name on. As the box shows, its nothing like the LanParty boxes but still informative. 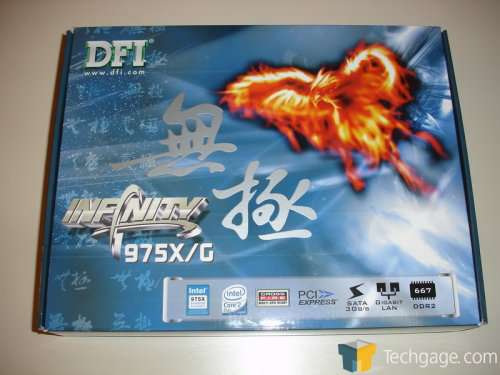 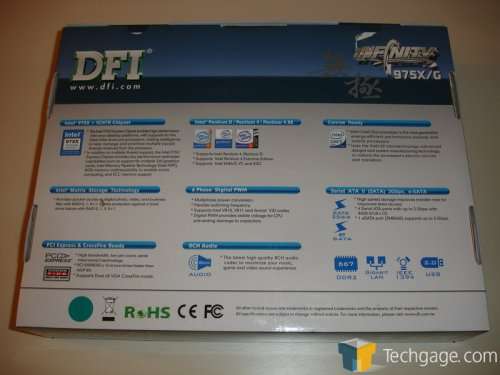