When overclocking this motherboard, I first did my homework. Having been a long time AMD user, I knew that Intel systems overclocked a bit differently than AMD machines and I wanted to find out all that I could. One place that I recommend everyone visit is DFI-Street. The DFI-Street forums are full of people that know these motherboards inside and out and are even home to a few DFI employees as well. The amount of knowledge in these forums is vast and a quick search through the threads can more often than not turn up an answer. If not, simply post and wait because whatever your problem might be, there is someone else who has dealt with it and worked through it.

The max 100% stable overclock that we were able to obtain was 3.33 GHz with a FSB of 370. From reading around, I know that there is more in this motherboard, and we even got up to a 405 FSB and a speed of 3.64 GHz. That’s well over a full 1 GHz overclock. However, this was not entirely stable and after some pressing, it failed and we had to start back at scratch. While I am not satisfied with where we got, I am content. Even with the overclocks we got, the numbers are all the proof that we need when performance comes into question. 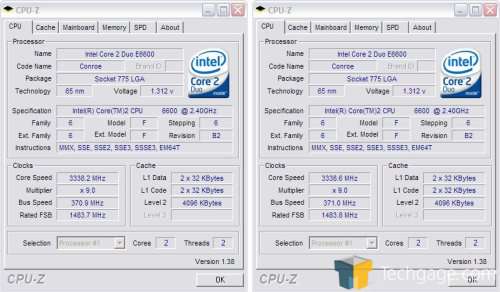 When the Infinity 975 X/G was released, it was an answer to many questions about DFI’s answer to the Core 2 Duo launch. At that time, the board came with a premium price. The board was well over 200 dollars and with the results we had with the board, I am not sure it would have been worth it. The board ships with support for all Core 2 Duo processors as well as Intel’s new QX6700 Quad Core CPU.

The 975 X/G also ships with a BIOS that does not overclock well at all. Others have had success with this same BIOS but it wasn’t until I flashed to a BETA BIOS, offered on DFI’s Taiwan website, that we could even get close to a respectable overclock. At this time, I am confident that there is more in this motherboard, CPU and RAM but to make deadline, the above mentioned highest stable overclock (370 x 9 = 3338.2 MHz) was the highest we could achieve. Yes we could go higher but some of the tests would fail, hard locking the computer.

There are quite a few positive points on this motherboard. The board ships with one gigabit Ethernet ports and the 8 channel high definition audio is a plus as well. The support for ATI’s CrossFire is a definite plus and the SATA II capabilities are without a doubt far superior to SATA I and welcome on this board. The overall layout of the board leaves little to be desired though. The placement of the power connectors baffles me and while the positioning really doesn’t affect performance, it wouldn’t have taken much I don’t think to have placed them in a decent area of the board.

For those of you who like to tweak, there are rumors that SLI can be ran on this motherboard with a pair of matching NVIDIA GPUs and a modified driver. By rumors, read “It’s actually been done.” Our 7800 GTs are in route for an RMA so we were unable to test this out but when they get back in, rest assured, it will be tested out and the results will be reported. 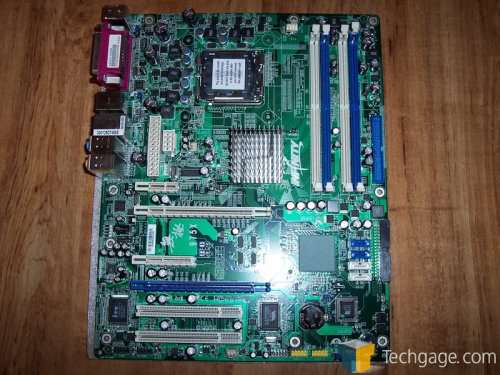 As it is when shipped, the 975 X/G doesn’t offer the performance that the DFI lovers have come to expect. With the stability of this BETA BIOS, I wouldn’t be surprised to see this BIOS as an official release in the coming weeks or month but please know that I have no way to confirm or deny this. DFI has always showered the LanParty series of motherboards with the most attention and this is evident in the 975 X/G.

All in all, the 975 X/G offers an extremely stable motherboard to owners of a Core 2 Duo CPUs and at this time, this is the only motherboard for the C2D line of CPUs from Intel. With rumors of the highly anticipated RD600 motherboard, DFI fans might want to wait a bit for this board to be released but if you are bold enough to use a Beta BIOS, or just want a stable system that’s going to run stock or slightly overclocked, the 975 X/G is a smart choice. It does lack the bling of other 975X motherboards but with a current street price of $164.99 (US), it’s considerably cheaper than the motherboards with the said bling.

When it comes down to it, I feel that the DFI 975 X/G is deserving of an 8 out of 10. There are so many small things that could make this motherboard better but it is an Infinity series and thus, is supposed to have less than a LanParty. If your looking for a strong stock motherboard than this is for you and the price is right. Should DFI release the BETA BIOS to the public in the foreseeable future, then this motherboard suddenly becomes an instant winner but since the BETA BIOS voids your warranty, we can’t recommend using it to anyone but the bravest of the brave.