by Rob Williams on February 6, 2014 in Peripherals

Page 1 – Introduction & A Look at the Hardware

When JD posted his in-depth look at Func’s HS-260 gaming headset last month, he closed a staggering eight-year gap since we last took a look at a Func product. While calling ourselves “slack” is often appropriate, in this particular instance we were off-the-hook: At some point, Func simply disappeared, and that was that.

Until late 2012, that is, when the company resurfaced. Func doesn’t like to refer to that long void as a “death”, and thus it doesn’t like to call its resurfacing anything other than a “refresh”. None of that matters, though. What does is the fact that in the earliest days, Func made some fantastic mousepads, so with this revival refresh, I looked forward to seeing what the company would now bring to the table.

As evidenced in the aforementioned look at the HS-260 gaming headset, Func means business when it comes to delivering products it can be proud of. The “Made for gamers, by gamers” slogan is old as dirt, but it’s one that seems to apply quite well to Func.

But here we have a mechanical keyboard that doesn’t quite look like it’s targeted at the gamer. It has no dedicated macro keys, for starters, nor are there any dedicated media keys. It doesn’t even have aggressive styling, a la Thermaltake’s MEKA G-Unit.

Believe it or not, that’s what I love about it. As I mentioned back in December, I’ve been wanting a standard-sized mech for quite some time that included macro capabilities without the need of dedicated keys. I even went as far as to bring up the idea to a couple of companies that are leading the gaming mech market, and I got responses back that could be summed-up as “meh”. Yet here comes Func delivering exactly what I’ve been wanting – and on its first offering.

Before going further, let’s be fair: Func’s KB-460 is not going to be for everyone. A lot of people want dedicated media keys, and I can understand that. Likewise with dedicated macro keys. I’m one of the odd ones that can go without both. For me, the issue of space is important; Logitech’s G710+ forces the laptop I keep on the desk to hang off of the side, for example, while a standard-sized keyboard, like Func’s, does not. I suspect that a lot of people with similar setups will appreciate the sizing of the KB-460.

That said, it’s best to consider the KB-460 as being a solution for those who want a feature-packed keyboard that comes in a modest size.

The photo a couple of paragraphs up shows just how simple the KB-460 looks, and depending on your tastes, that could be a good thing for a bad thing (for me, it’s a great thing). You might have noticed a red tinge under the keys, something that can be seen even better in this next shot: 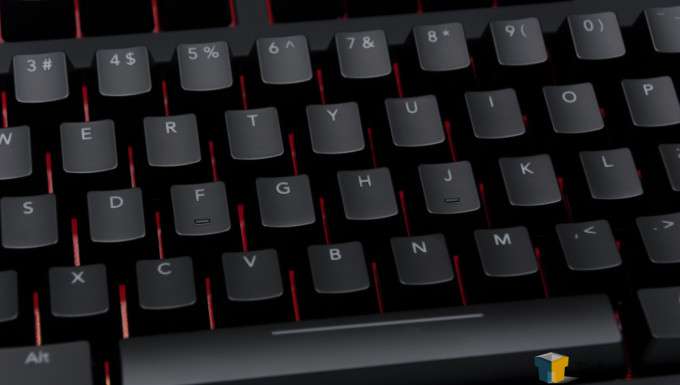 Given the fact that the KB-460 has a simple design, it seems that Func wanted to add a bit of uniqueness to its mech by coloring the entire floor beneath the keys red. This complements both the CHERRY MX Red switches and also the red LED backlighting. Overall, it looks sharp. 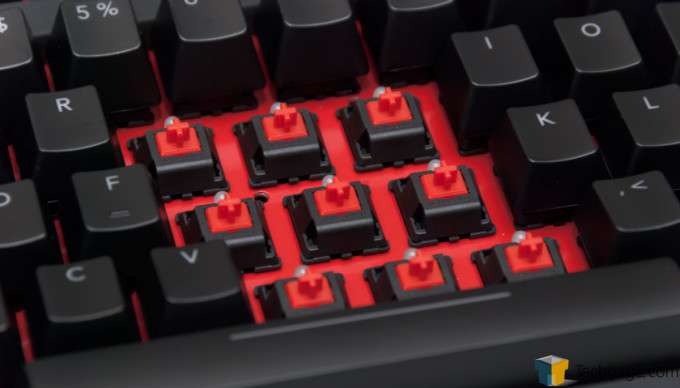 For the KB-460, Func has decided to stick with CHERRY MX Red switches as the exclusive option, something that will no doubt push a good number of potential customers away. Either for typing or gaming, a lot of people don’t care too much for red switches because they’re very easy to push. That’s by design, of course, as it’s made for people who want as little resistance as possible. The downside is that sometimes it’s easy to push a key by accident.

I personally believe that Func should have gone with CHERRY MX Brown switches if it were going to go with just one, as brown meets most people in the middle – there’s no audible click, but there is a slight bump, and the pressure required to bottom a key out is reasonable for most. I wouldn’t be surprised if Func added more switch options to the KB-460 in the future.

After moving from Thermaltake’s MEKA G-Unit to the Func KB-460, I noticed that the keys felt much lighter, almost light enough to cause some concern. Normally, I wouldn’t see that as a problem, but launch Logitech G710+s (like mine) had an issue where the Ctrl keys had keycaps that would break after a couple of months – the pillar inside would literally snap. While that issue has since been fixed on the G710+, it’s a risk I’m now aware of. 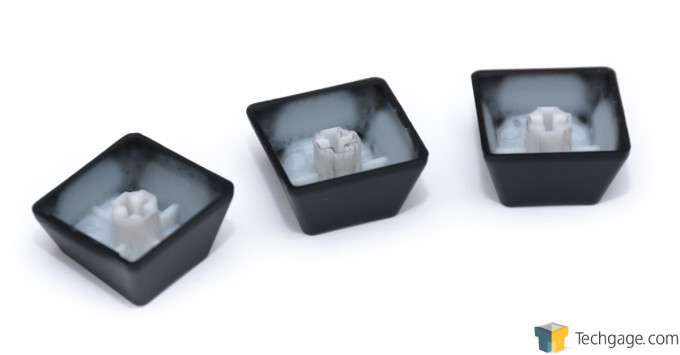 The shot above doesn’t do much to enforce the fact that the keycaps are light, but a couple of the sides of the pillars are quite thin, so I do hope no such issue like what plagued Logitech’s G710+ will arise here. I’d consider this a non-issue at the moment, but I do plan on using this mech for the foreseeable future, so if an issue does arise, I’ll talk about it.

As I mentioned earlier, the KB-460 has no dedicated media or macro keys, so there’s not too much to show in that regard. However, what I forgot to photograph were the special icons on the F1 – F12 keys, which represent alternate functions: F1-F3 (Volume); F4-F6 (Media Control); F7-F11 (Profile Change); and F12 (Func mode – disables Win key and enables full N-key rollover).

At the top-right of the board we can see some status LEDs and also one of the most subtle vendor logos I’ve ever seen on a product. Yet another thing I forgot to photograph: LED brightness control functions on the numpad (a glimpse of one can be seen on the 8 key). 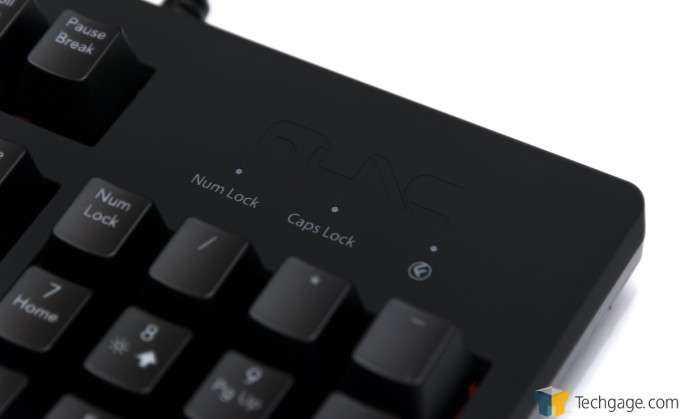 For those who like to plug a USB flash drive, mic or some other peripheral into their keyboard, you’re in luck here. Two USB 2.0 ports are available here. 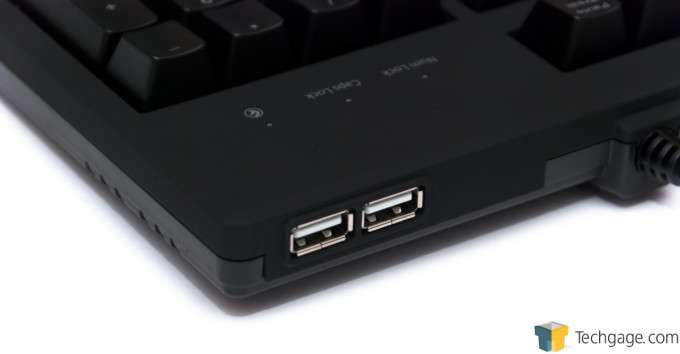 There’s not too much to see on the back of the KB-460, but the below shot shows just how it is the included palmrest attaches to the keyboard. Unlike most palmrests I’ve dealt with, the two plastic legs on this one are not preinstalled. After clicking those into place, and then attaching the palmrest to the keyboard, you’ll be good to roll.

And, with the palmrest installed, here’s a fresh look at the front: 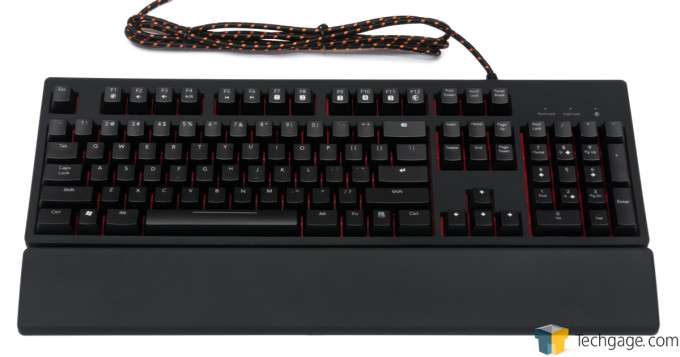 I’m sure the cable has stood-out in the past couple of images, so here’s a close-up: 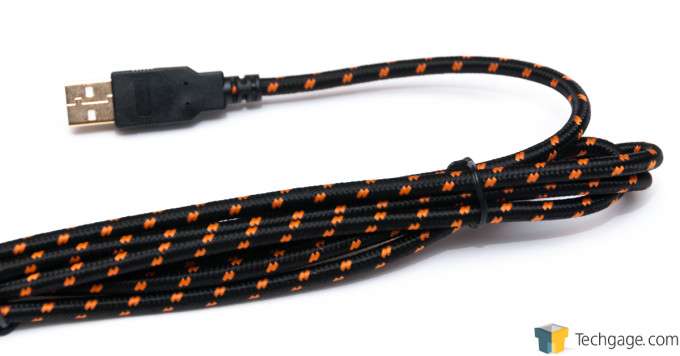 The KB-460 has one of the most durable cables I’ve seen on a keyboard, and it’s able to accomplish that without being as thick as a hot dog.

Up next, we’ll tour the KB-460’s software, and then wrap things up.