To test the performance of the Aurora 570, we used the same setup we have used in the past.

As we start to review more and more PC cases, we will compare them to past review results and put them all in a convenient graph. While this is inherently flawed because of the difficulty in creating the exact same ambient temperatures in each test, it is done as close as possible and should provide a decent idea of cooling performance. One thing we can gauge is the sound that the cases produce and in our tests of the Aurora 570, we are happy to report that even with three 120mm fans running, the audible noise put off was barely noticeable above the ATi stock fan.

In our tests, we taxed the CPU up to 100% usage by running CPU Burn-In on both cores for 45 minutes. After this time, we recorded the temperature of the CPU and then canceled the burn-ins. To work the GPU over, we simply looped 3D Mark â€™06 for an hour. Once the time was up, we used ATiâ€™s Catalyst Control Center to get the temperature of the x1900 XTXâ€™s core.

Surprisingly enough, the results show that the Kandalf barely beat out the Aurora 570 in each of the readings despite having an extra 120mm fan. This can be blamed on the hard drive cage blocking a lot of the cool air being brought into the case by the front 120mm fan. However, the differences were not great and do not concern us at all. The results are show with the mesh side on and with the clear side as well. 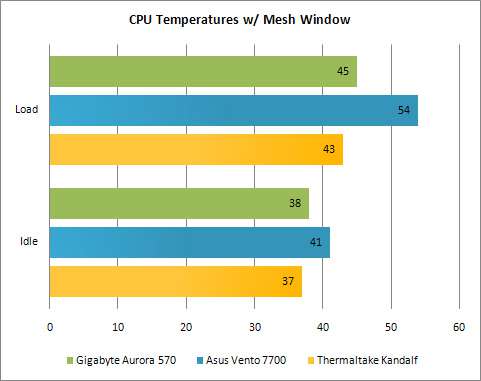 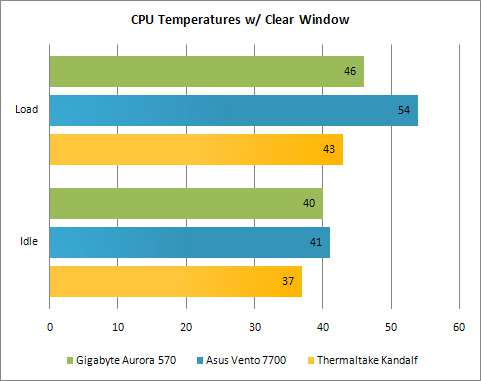 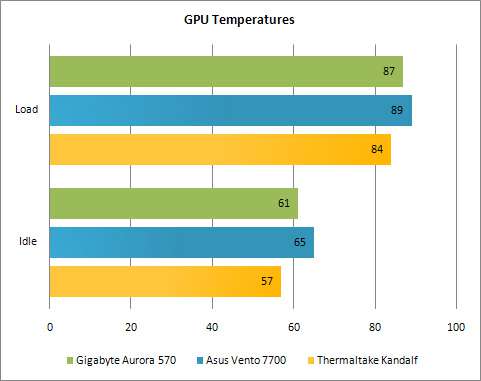 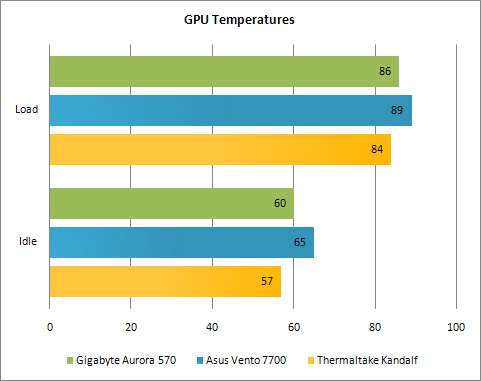 As the graphs indicate, there wasnâ€™t much of a difference but the Aurora did fall just behind the Kandalf in each of the tests. As stated earlier though, there is a certain amount of a margin of error so these results canâ€™t be taken as 100% fact but rather, a general idea of what the Aurora 570 can offer in terms of cooling performance.

The Aurora 570 is a solid PC chassis. Unlike our recent review of the Asus Vento 7700, Gigabyte has actually appeared to put a great deal of effort into the design of the Aurora line of gaming cases. With their keen eye to the small details, Gigabyte has produced a solid chassis for everyday gamers and enthusiasts alike.

The ability to easily integrate a water setup onto the case is a huge bonus and one that we feel should not go unnoticed. The dual 120mm fans on the back, while silent, donâ€™t move a great deal of air. This can be remedied by placing a more powerful set of fans on the back of the case but with that, comes noise.

The provided fans are decent, but I wouldnâ€™t recommend them be used on a radiator in a water setup. With its tool less design, water ready features and its $169.00 (US), the Aurora 570 has earned an editorâ€™s choice award. While itâ€™s our personal pick for a new PC build, the cost of just under 170 dollars isnâ€™t cheap and in my opinion, aluminum is lighter than steel but far less sturdy.