On this page and next, we’re tackling many different renderers, because not all renderers behave the same way. That will be proven in a few cases. If you don’t see a renderer that applies to you, it could to some degree in the future, should you decide to make a move – either to a different design suite, or different renderer plugin. An example: V-Ray supports more than just Autodesk’s 3ds Max that we test with; it also supports Cinema 4D, Maya, Rhino, SketchUp, and recently announced, Houdini. 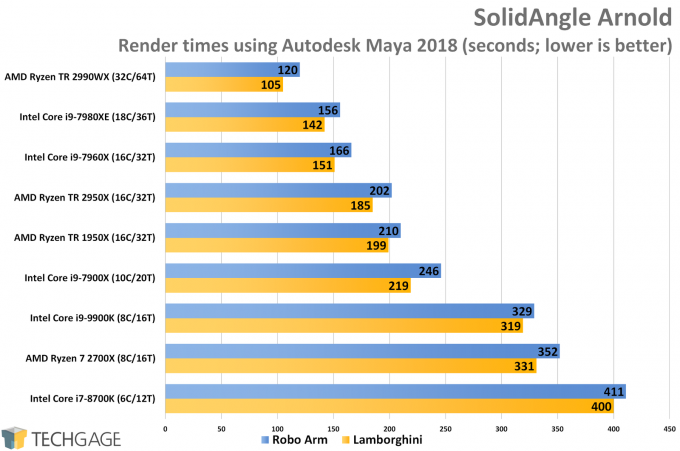 For rendering, the more CPU horsepower there is at the ready, the faster the render is generally going to be. Of course, faster clock speeds will make a big difference in rendering, but it’s hard to have such a high clock speed that it manages to negate a handful of cores. In Arnold, the 32-core Threadripper 2990WX rules the roost, with Intel’s last-gen 18-core sitting a bit behind it.

As for the focus of this article, the Core i9-9900K once again leaps ahead of the 8700K, and also AMD’s Ryzen 7 2700X, which performed really well against Intel’s new eight-core overall.

While Maya was used as the test base here, Arnold performance will scale similarly with the same render plugin in other design suites, such as 3ds Max – so don’t make the mistake in thinking this performance isn’t entirely relevant to you if you’re an Arnold user in any other suite. The same applies to most renderers that offer cross-program plugins. 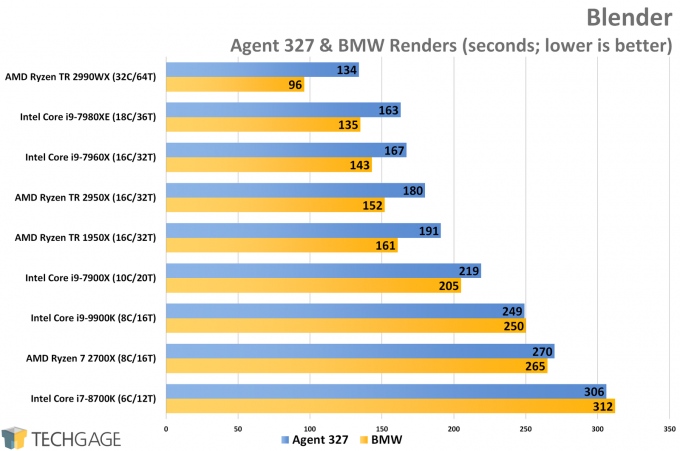 With Blender, we’re starting to develop a trend started with SolidAngle’s Arnold. The i9-9900K once again topples the six-core 8700K from last year, and also beats out AMD’s 2700X with a similar margin as before.

Again, it doesn’t take much extra horsepower (or corespower?) to see some dramatic gains here. AMD’s and Intel’s top chips prove their dominance at the top, with AMD’s 32-core in particular calling the first position home. It’s worth noting that Blender performance seems to be a bit better in Linux than it is in Windows, as evidenced by the benchmark result from our complement Linux assessment. 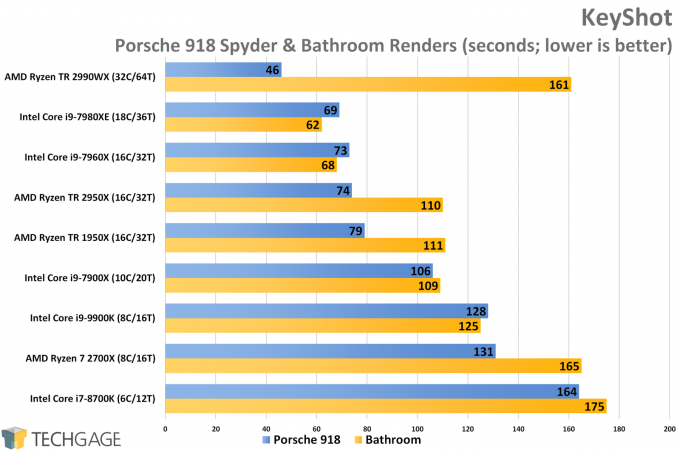 KeyShot has to be one of the most satisfying renderers to use, since it takes great advantage of iterative rendering, enabling it for a project as soon as it’s loaded. This allows users to quickly see the results of their scenes from different angles, and because KeyShot is completely CPU-bound, the bigger the chip, the quicker a useful number of iterations are going to render.

Ignoring the fact that the 32-core chip has obvious issues with the interior scene (something we’re not sure was fixed in the new KeyShot 8 quite yet), the i9-9900K again iterates quite well on the 8700K’s performance, becoming one of the few CPUs that renders both projects in a similar amount of time.

It’s not at all important to this performance outlook, but because of that performance anomaly with the 2990WX, the 2700X performs the same in the interior scene. KeyShot is one suite in particular we plan to increase our coverage on, so we look forward to putting these chips through even more tests – and with the latest version of the software. 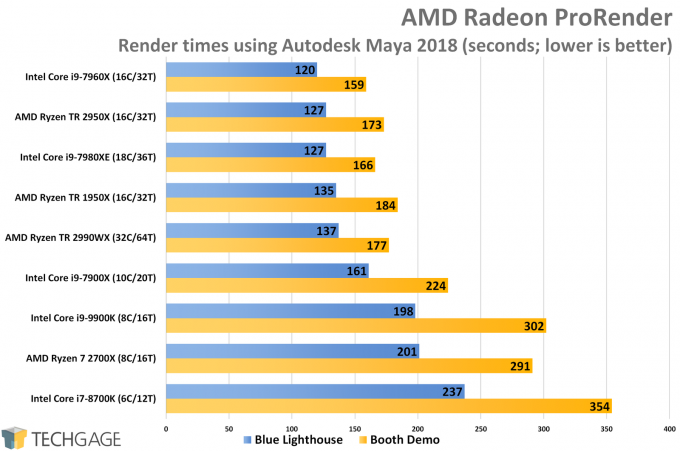 AMD’s Radeon ProRender plugin is an interesting one, and not only because it’s crafted by one of the major CPU and GPU vendors. ProRender seems to operate the absolute best on AMD’s own hardware, which isn’t too much of a surprise. That’s one thing that might have kept the 2700X so competitive with the 9900K here. It even managed to win the automotive booth demo, which is the more complex of the two scenes.

As a bit of proof that ProRender performance is interesting, note the fact that the 16-core Intel chip beat out the 18-core one, something that ordinarily would not happen. Similarly, heterogeneous rendering works better on AMD+AMD than Intel+NVIDIA, so if you take ProRender very seriously, and especially if you want to go the multi-GPU route, AMD is currently the safest bet (more can be read on this here). 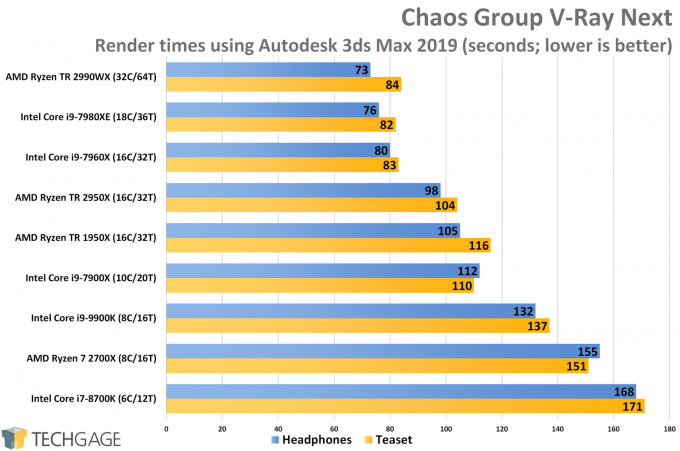 We’ll start our V-Ray look with the actual renderer plugin in Autodesk’s 3ds Max, and follow-up with the standalone benchmark result in a moment. First and foremost, the 9900K once again performs a fair bit better than its older 8700K brother. In the match-up between 9900K and 2700X, AMD falls behind, but not too far behind.

Ultimately, the faster the CPU, the better the overall performance, but Intel seems to get an edge from the get-go. You can see some heterogeneous results from earlier this year if you want to see how much a render can benefit from taking advantage of both the CPU and GPU at the same time.

We do not put a ton of faith in Chaos Group’s standalone V-Ray benchmark, but our reason has more to do with the GPU component than the CPU one. The GPU renderer isn’t as consistent on AMD as it is NVIDIA, so we tend to avoid it, but for CPU, it’s seemingly accurate on all architectures. That said, this standalone benchmark is based on V-Ray 3.5, rather than the newer 4.0, but it still works as a good way to test one machine against another. That assumes you don’t mind registering with Chaos Group to snag the download. 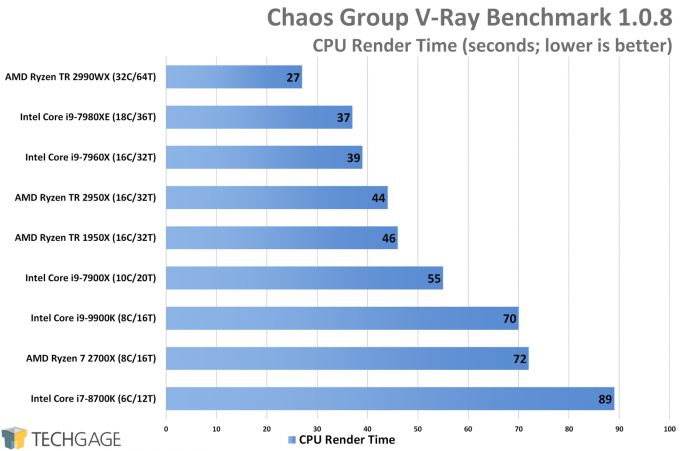 We finish off this first batch of rendering results with more of the same: the 9900K beats out the 2700X, but only by a slim margin. It easily beats out the older 8700K, and sits a fair distance behind the 7900X, which has four extra threads to take advantage of.