For our testing, we take 250 RAW files (in Nikon’s .NEF file format) which have a 10-megapixel resolution, and export them as JPEG files in 1000×669 resolution, similar to most of the photos we use here on the website. Such a result could also be easily distributed online or saved as a low-resolution backup. This test involves not only scaling of the image itself, but encoding in a different image format. The test is timed indirectly using a stopwatch, and times are accurate to within +/- 1.00 seconds. 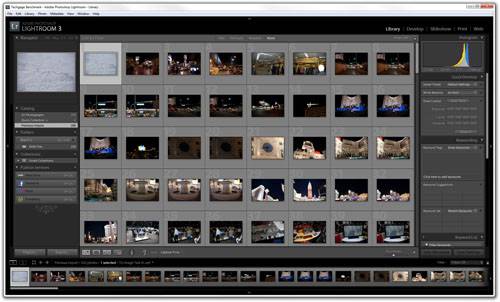 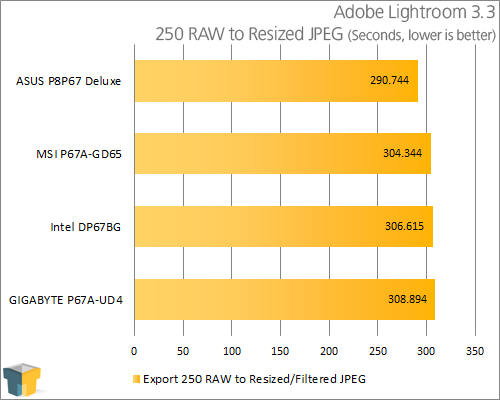 Although Lightroom doesn’t take advantage of all the threads that a CPU has to offer, it does benefit from faster overall single-threaded performance. For that reason, ASUS out-performs the pack once again. The others all ranked close to each other, with a minor 4.4 second delta between the top and bottom – not bad for a process that takes about five minutes.

The task of photo editing can be made a lot easier with a faster computer, but nothing is quite so apt to benefit from a speed-boost than a video encode. With mobile phones and similar devices being as popular as they are, it’s little surprise that a lot of people like to encode their HD videos to something a bit more manageable.

While some encodes might take minutes, others can take hours, and to get a more accurate look at overall endurance and both CPU and I/O performance, we use the popular Handbrake encoder to take a 1080p Blu-ray movie and encode it to a 720p archival-quality MKV. The settings used here are not for the feint of heart (the encode times are for just the first 10 minutes of the film). These are the same settings I use when encoding a film for archival purposes – whether it’s a Blu-ray or DVD. 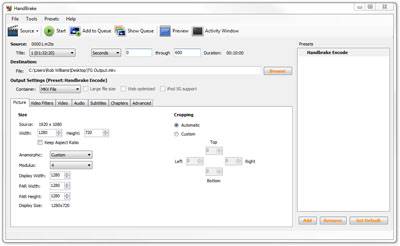 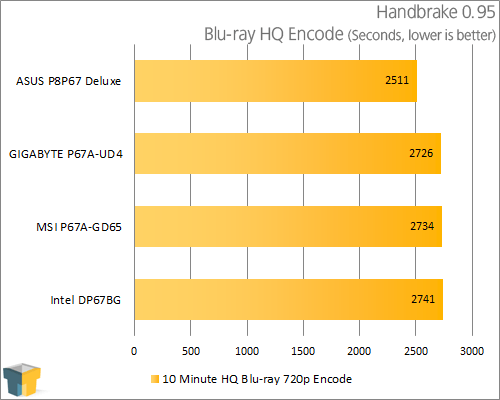 As one might have guessed, video encoding is about as CPU-dependant as it can get, and thanks to ASUS’ CPU frequency boost, it again wins this round. Similar to our Lightroom results, the other boards perform just about the same, with super-minimal differences between them.

SiSoftware’s Sandra is a piece of software that needs no introduction.It’s been around as long as the Internet, and has long provided both diagnostic and benchmarking features to its users. The folks who develop Sandra take things very seriously, and are often the first ones to add support to the program long before consumers can even get their hands on the product.

As a synthetic tool, Sandra can give us the best possible look at the top-end performance from the hardware it can benchmark, which is the reason we use it for our memory tests – both for transfer and latency. 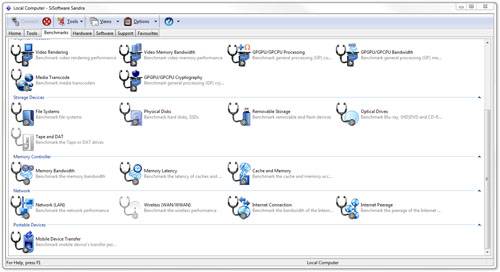 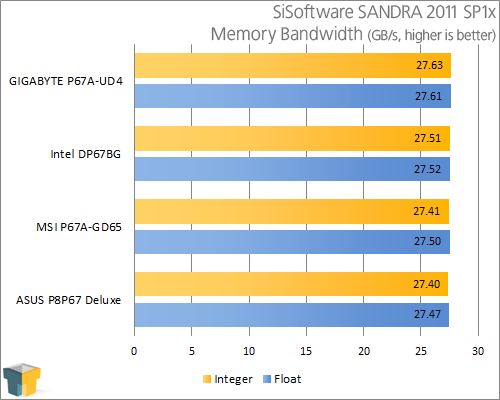 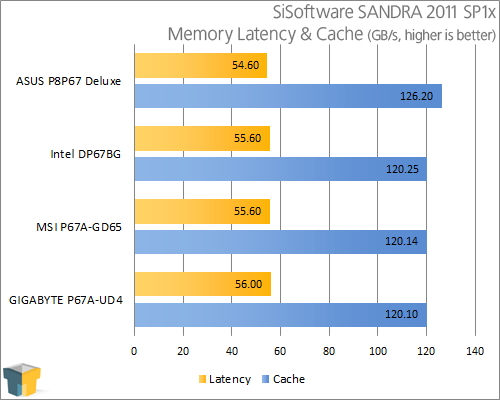 With super-fast RAM like the kit we’re using (Kingston DDR3-2133 9-11-9), the CPU won’t have much of a say with regards to overall throughput, but where latencies are concerned, a faster CPU can make a huge difference. We can see that to be the case here, with ASUS slimming down the latency by a single millisecond, and boosting the cache throughput by 6GB/s.