Next up is GIGABYTE’s P67A-UD4, which I consider to be one of the best-looking boards on the market (second to GIGABYTE’s own UD7 model). Those who love black PCBs and clean aesthetics are going to love this board here, as for the most part, things are kept simple, right down to the heatsinks.

As someone who appreciates lots of fan headers on a motherboard, this board let me down a bit. Aside from the top CPU fan header, there are just three more; one next to the DIMM slots, another at the bottom, and the last up top, next to the 8-pin power connector.

A couple of pages ago, I mentioned that I dislike those 8-pin connectors to be anywhere except at the top, and horizontal, but that’s not something accomplished here. However, because the connector is still close to the absolute top, plugging in the connector shouldn’t prove to be too much of a problem. While I was forced to use a cable extender with MSI’s board, for example, I didn’t need to use it for this one.

Like ASUS, GIGABYTE puts a fair bit of focus into efficient power delivery, and the company’s P67 line-up is no exception. To deliver “Maximum Power” to the CPU, GIGABYTE first makes sure the board has lots of power phases, and then packs in the “Dual CPU Power” feature, which aims to deliver reliable power to the CPU, and prolong the life of the phases by only using half of them if the CPU isn’t doing too much. 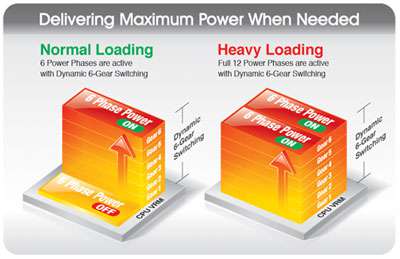 Also included here is an Intel-approved ‘Intersil’ VRD (VRM) chip which makes the most efficient delivery of voltage from one component to another, and things get so technical when looking into the design that it’s overwhelming. So much so that Intel has a 132 page document explaining all of it. Another interesting and related feature is “Driver MOSFETs”, which integrate MOSFETs and a driver IC into the same chip in order to increase efficiency and save space.

There’s a lot more to this board than what I can mention here, so for those interested in diving in even further, I recommend heading on over to the official product page. For the rest of this page, we’ll look through the board design and its features.

As I mentioned before, I consider this board to be one of the better-looking out there, though the UD7 still reigns surpreme where aesthetics are concerned for me. I simply appreciate the super-dark color scheme and complementary heatsinks. GIGABYTE has made some major strides with regards to looks for its current crop of motherboards – it’s a major improvement. 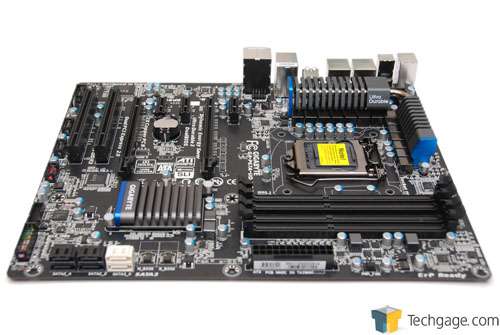 There’s not too much to see at the top of the board here except for the 3-pin fan header to the right of the DIMM slots. 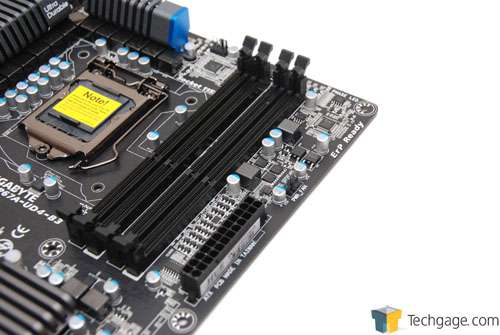 Things get more interesting near the bottom, where there are six SATA ports along with the ATX chassis connectors (right where they should be), a USB 3.0 header and also the USB 2.0 headers. 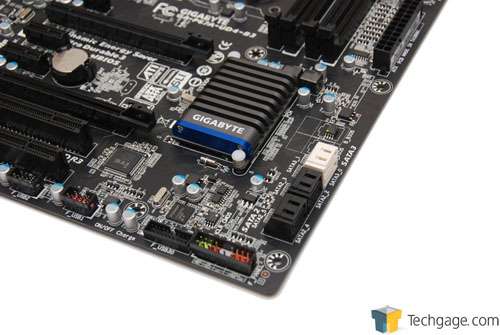 Those wanting dual-GPU setups will have no problem indulging in them with this board, as GIGABYTE leaves plenty of room between both PCI Express x16 slots, and in addition provides a total of 3 PCI-E 1x slots and 2 legacy PCI. 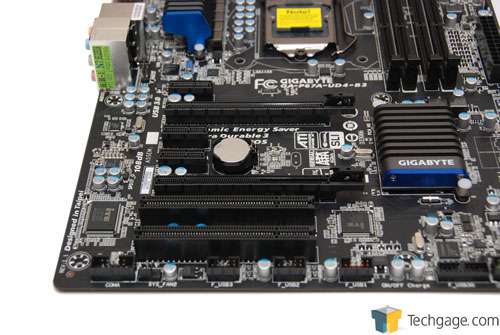 GIGABYTE left a ton of room around the CPU socket on this board, so it’s unlikely that any CPU cooler will have a problem in being mounted here. Thanks even to the heatsink design, there is a lot of lenience with the space provided. 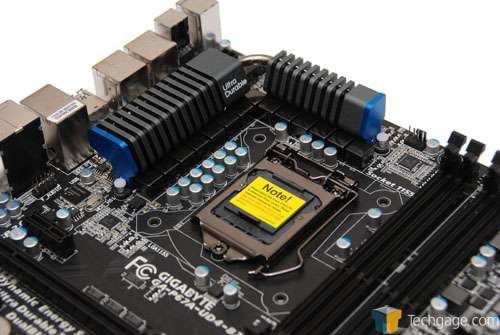 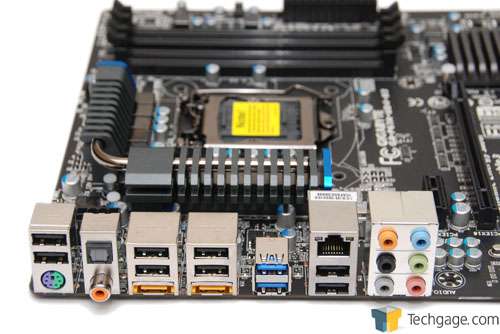 The UD4 board isn’t quite as packed as the P8P67 Deluxe we’re also looking at, but it does offer a good mix of what’s important and leaves nothing out. Plus, the board looks great as well. Does the BIOS match?