MSI’s P67A-GD65 comes about as close to Intel’s simple design without sacrificing some cool features. And in fact, this board includes some features not found on the other boards we’re looking at here, and some features that you don’t ordinarily see on a $180 offering.

The board features a dark brown PCB, similar to ASUS’ P8P67 Deluxe, and utilizes blue and black components which has almost become default as far as motherboard color schemes go. The heatsinks used here are rather simple in design, but that’s all it takes to be sufficient.

One area where the GD65 shines is with its collection of fan headers. Aside from the CPU, there are four others, and while some of the other boards we’re looking at here also include four, they are not located in areas quite so convenient. Next to the DIMM slots, there are three, and right underneath the CPU socket, there is one more.

As mentioned at the outset, MSI touts its “Military Class” components across multiple product lines, and with one of its highest-end P67A offerings, we’re of course treated to the best of the best. Included in these components are HI-c tantalum-core capacitors, high-quality solid capacitors and super ferrite chokes.

MSI’s implementation of these components are a bit interesting, because while they are of very high quality, MSI doesn’t seem to offer comprehensive power schemes, similar to ASUS’ Digi+VRM or GIGABYTE’s Dual CPU Power. It seems MSI either doesn’t think those matter, or instead use the highest quality components possible to help make up for what’s lacking in the engineering department.

Like the ASUS we looked at earlier, MSI’s GD65 offers dual-GPU capabilities for both AMD’s Radeon and NVIDIA’s GeForce family of graphics cards, opening up many options to consumers. 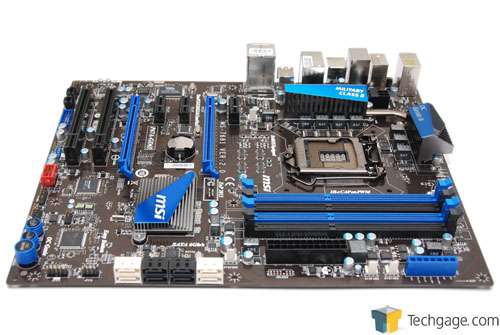 At the top-right corner of the board we see the first three fan headers, with two grouped together near the top. I’m a big fan (no pun, I swear) of this location for two, since many chassis today will have multiple fans located towards the top. Having a couple of headers located right here is quite convenient, especially when you can feed the cables through a rubber grommet such as with our Corsair 700D chassis.

Also here is a bar for monitoring voltages with the help of a multimeter. During overclocking, you can simply stick a probe into one of these and monitor the true voltage values of things, rather than rely on the EFI to relay semi-accurate information. 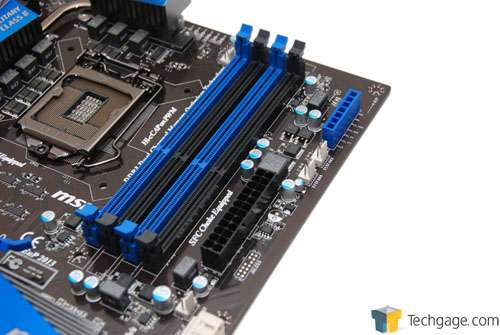 While the P67A-UD4 from GIGABYTE offers SLI support, MSI makes up for its equal price by giving us eight SATA ports to deal with here, along with on-board power/reset buttons. There’s another for “OC Genie”, which when pressed, will overclock the CPU to around 4GHz, taking out the need to even enter the BIOS. It’s a nice feature for those who want a quick, free boost. 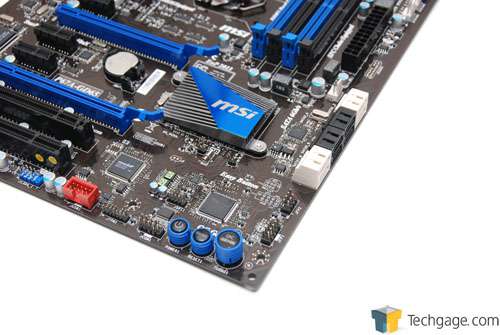 As mentioned before, this board offers support for a CrossFireX setup, and as is becoming a theme, MSI also offers 3 x1 slots alongside the x16s, and also two legacy PCI. 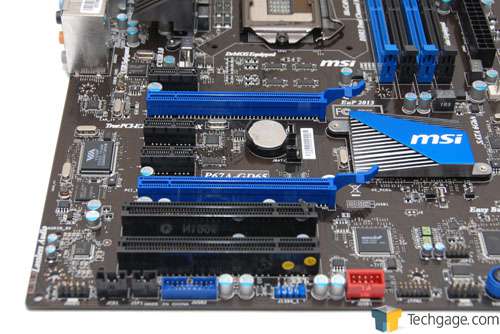 The GD65 looks to support any CPU cooler in production by offering a completely clean surface area around the CPU socket. If there’s a cooler that won’t fit in here, I am not sure I’d want to see it. One beef I do have here though can be seen with the 8-pin connector to the top-left of the board. This is located just south enough from the top that I had no choice but to use a cable extender – a problem that could be negated it if were located at the absolute top. 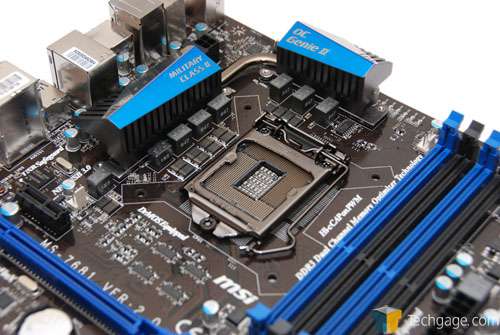 At the back we have 8x USB 2.0 ports, 2x USB 3.0, a LAN, full complement of audio ports, FireWire, eSATA (including power), a PS/2 mouse/keyboard port and also a CMOS clear button. 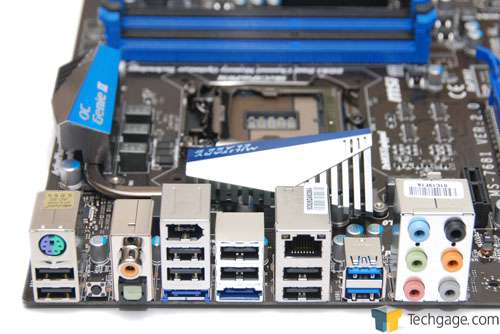 Overall, I like the P67A-GD65 quite a bit in terms of looks, design and features. I love the accessible fan headers, and layout-wise, I have nothing to complain about. Well, aside from the 8-pin power connector, which I really wish was nearer the top (this should be the case on any motherboard).

MSI is the only vendor aside from ASUS of the four here that opted to deliver a full-blown EFI experience, though its take on things is quite a bit different. Let’s take a look at see how it compares to the EFI seen on the P8P67 Deluxe.