Over the course of the past month, we’ve taken a good look at a handful of budget graphics cards offerings. In the middle of January, we checked out AMD’s $100 Radeon HD 5670, and then we quickly followed-up with a look at NVIDIA’s three lowest-end offerings. Not too long after, AMD tossed even more models our way; the under-$100 Radeon HD 5450 and HD 5570. In case it isn’t obvious, that’s a lot of budget offerings to take a look at in a single month.

So what am I getting at? Well, when I received a package from Sapphire and found the Radeon HD 5850 Toxic inside, I had a major sigh of relief. After taking a look at all those budget graphics cards, here I had a special version of one of my current favorites. At around ~$300, the HD 5850 is one sweet card, able to power all of today’s games at the highest resolutions, even with anti-aliasing enabled. Ahh, the power!

After taking the Toxic card out of the box, I wasn’t quite sure what to think. With its “Toxic” moniker, it’s clearly a special edition, of sorts, but aesthetically, it didn’t look much different than a reference offering. The cooler design itself differs to a small degree, but the actual shape is almost spot-on. So what’s the deal?

Toxic is merely Sapphire’s term for its pre-overclocked line-up. Unlike the Vapor-X models, Toxic cards don’t have a major emphasis on cooling performance. This isn’t a problem, but for those using a graphics card in a tighter enclosure, the improved cooling performance of a Vapor-X is highly recommended by us. We’ve taken a look at several Vapor-X models over the past year, and each one has greatly impressed us with its performance.

With its 765MHz Core (+40MHz over reference) and 1125MHz Memory (+125MHz), it’s clear that the Toxic version can make a rather stark performance difference over the reference card. But as we’ll see later in the article, these pre-defined clocks are a little modest, as the card has quite a bit of breathing room, and almost has the ability to bring us close to HD 5870 territory. 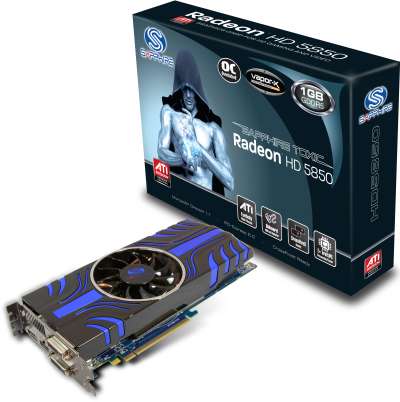 Before we take a look at the Toxic, let’s review the current line-up from AMD. All of the models listed in the table below are current-gen, so all support the things we’ve come to like about the HD 5000-series, such as DirectX 11 and Eyefinity. Currently, the only model we can’t talk about much is the HD 5830, but you’ll learn a lot more about that next week. Also in the weeks to come, we’ll see an Eyefinity-edition HD 5870, but I probably don’t have to explain its purpose.

Although the Toxic card features an almost identical chassis design to the reference card, the big difference is that it uses a special fan, which happens to be exposed, for increased airflow. This cooler design isn’t what I’d consider fascinating, but it is a modest improvement over the reference, and should help us reach higher clocks when overclocking. I personally can’t say I’m a fan of the blue/black design going on here, but that’s more of a personal opinion, and matters little in the grand scheme of things. 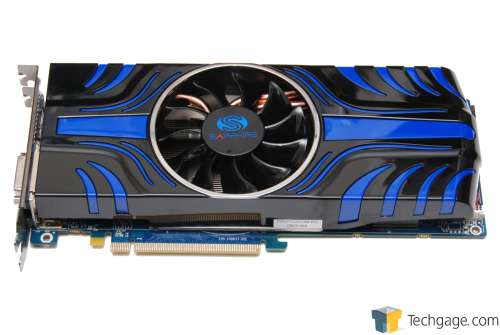 Most HD 5000-series cards to date have included DisplayPort, HDMI and dual DVI-D connections, and the HD 5850 Toxic is no exception. Right out of the box, you can hook up to 3 displays with a 2560×1600 resolution on each. If you do go that route, I’d recommend not reading our site at 12 megapixel… it doesn’t look quite so good. 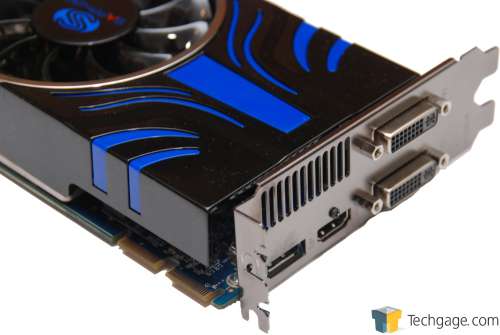 As a high-end card, you wouldn’t expect less than 2 x PCI-E power connectors, and that’s just what we see here. In this photo, you can see another small difference between this cooler and the reference. While the reference is mostly closed off at the end (with breathing holes), Sapphire’s Toxic is a bit more open. 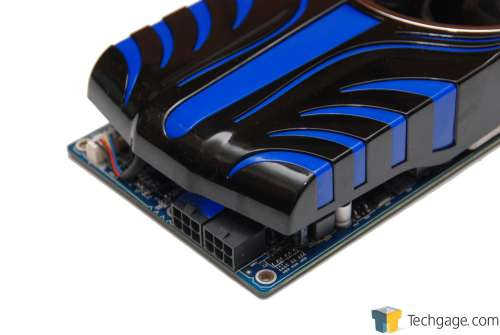 Before we hit up our results, the next page will cover both our test system specs and our methodologies. If you’ve never looked through those before, I recommend it. After that, we’ll dive right into our look at Modern Warfare 2 performance.