Last week, Intel unveiled its new Core X series of CPUs, something that should have happened today if not for certain websites taking it upon themselves to spoil each and every launch. While the Core X update is one of the biggest news items in this latest bundle, there’s also new Xeon W SKUs to talk about, as well as adjustments on the “KF” and “F” SKUs that don’t include integrated graphics. 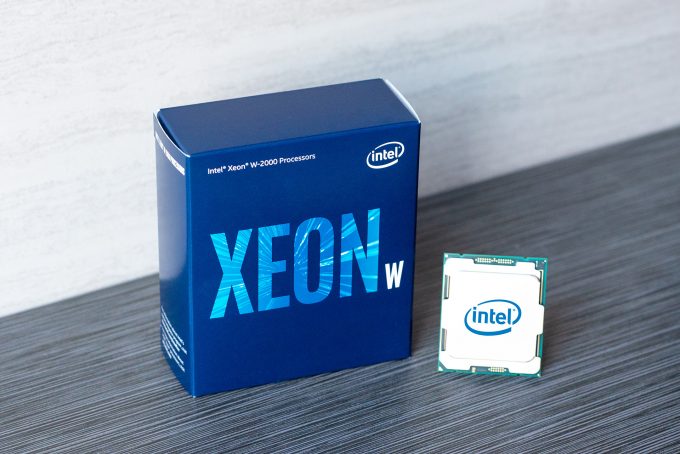 For a quick refresher on what Core X is going to bring to the table:

For the most part, all of these new enthusiast CPUs, and the new Xeon W CPUs, are effective iterations on the previous generation. These chips are still built on a 14nm process, but generational updates should help push this gen ahead of last gen comfortably enough.

What’s interesting about that Core X series lineup is just how modestly-sized it is. It could be that Intel will pad out the models more at some point, but as it stands today, the Xeon W update is going to offer many more options, including those at lower price-points. All four of the Core X SKUs are taken care of with a Xeon W variant, and seemingly retain the clocks and other specs.

Xeon W variants are going to cost more than the Core X or mainstream series, owing to the fact that they include Intel vPro and ECC support as two of the big selling-points. Whereas Core X tops out at 256GB of memory, Xeon W bumps that to 1TB – so for the truly hardcore of hardcore workloads, Xeon W is going to be an alluring choice. For the DIYer, finding Xeon W in the wild might be tough, as these chips are really targeted at OEMs. We’re sure that companies like BOXX and Puget will happily hook you up with one of these latest chips if you wrap one of their builds around it.

As with the new Core X series, Intel will be bundling 2.5G Ethernet via its i225 controller with this new series, which helps push us just a bit further in the right direction of leaving 1Gbps Ethernet behind. That said, we can’t help but wish this wasn’t at least 5GbE, but chances are good that if you need a faster solution, you’ll have to go the add-in card route anyway. High-end AMD X570 boards have typically bundled 5 or 10GbE in, so we’d expect to see complementary boards for these new Intel launches offer much of the same. 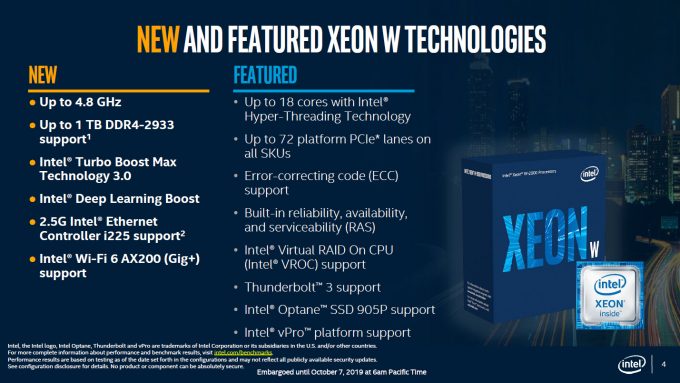 What also comes bundled is Wi-Fi 6 AX200, a feature not too often talked about on the workstation side of the market. Still, even if you don’t plan on using Wi-Fi, it’s nice to have a solid solution in the event you eventually need it (when you test as much hardware as we do, you’d be surprised how often that kind of need arises.)

In a post from last month where we mentioned that Intel’s tune about Maxon’s Cinema 4D has seemingly changed over time, we mentioned that the company should instead focus on solutions that still work better on Intel, such as Chaos Group’s V-Ray. Well, color us surprised that the latest slide draws explicit attention to V-Ray: 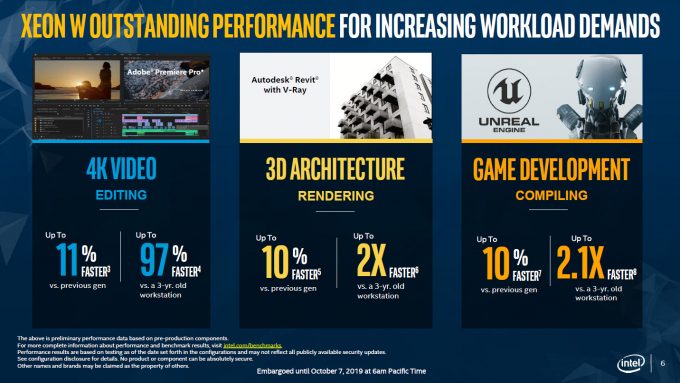 It’s also coincidental that in another slide, Autodesk’s Maya was name-dropped, as we published an in-depth look at that last week (along with the Arnold renderer).

If we have concerns about any of Intel’s new CPUs, it really has to do with the fact that it’s fallen far behind AMD on the cache front. Our benchmarks prove that this doesn’t matter all of the time, but in our recent testing of Adobe Lightroom, we discovered that AMD’s new “cache-rich” chips eat through its export workload. In some ways, AMD really caught Intel with its pants down, because it’s going to take at least another generation to “correct” any of this. AMD is facing the same issue right now on the GPU side, with NVIDIA’s Turing and RTX features proving very difficult to beat.

As for the CPU mainstream side of things, Intel has listened to users and decided to drop the prices of its F and KF 9th-gen Core models, which is something that should have happened in the beginning. Nonetheless, the 9900K GPU-less equivalent is the 9900KF, and is now priced at $463 (per 1,000). In effect, all F and KF SKUs drop the price at least $25 or so, so it’s something, even if not as big of a drop as we’d hope.