On this page, we’re going to be tackling a few additional encoding-type projects. Since the beginning of its life, we’ve benchmarked with Adobe’s Lightroom, but dropped it for about a year or two because it wouldn’t reliably scale. Over time, things changed, and now the application is pretty efficient on multi-core CPUs.

In addition to Lightroom, we also have Blackmagic RAW Speed Test, which acts as a simple way to see how a CPU can handle playback of BRAW footage at different compression levels. In time, we’ll be adding a much fuller Resolve test to the suite, but this BRAW test fills in for now. Finally, we’re also testing with LameXP, an open-source music encoder that can take advantage of many-core CPUs, as well as the super-popular HandBrake transcoder. 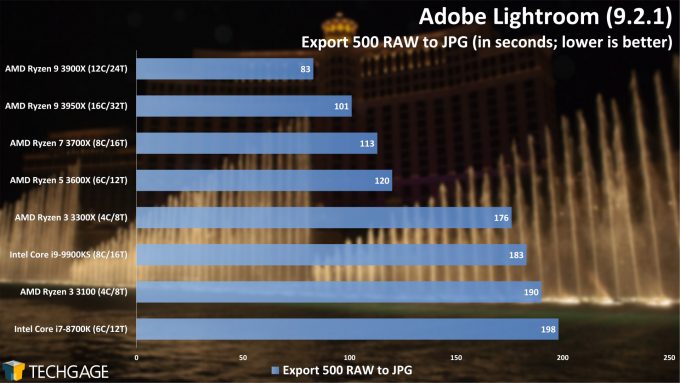 When can a $120 quad-core CPU beat out a $500 one? When that CPU is AMD’s, and the test is Adobe Lightroom. Last September, we wrote about AMD’s “Cache Rich” Zen 2 architecture improving Lightroom performance, but based on these fresh results, it’s not cache that’s doing it. Both the eight-core 9900KS and four-core 3300X have 16MB of L3 cache available, yet AMD’s chip with half the number of threads manages to win.

This is not at all the kind of performance scaling we’d expect to see from these CPUs, but it’s of course a great thing to see. We should note that all of the photos we use for this test are older, so we plan to overhaul with more modern resolutions and files soon (that will tie in with getting Capture One tested again). 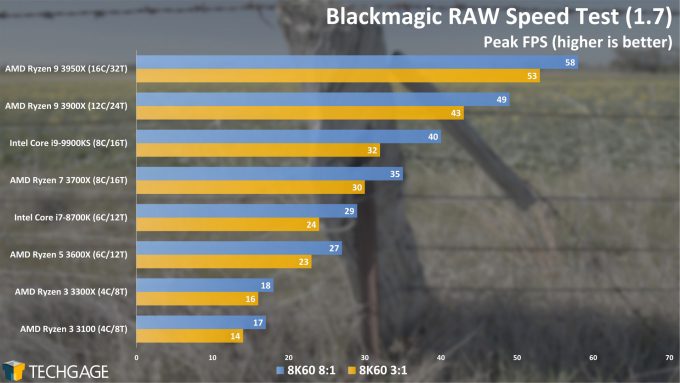 As with other video encoding work, BRAW use will be improved when the GPU is involved, but you still want a competent enough CPU that’s not going to hold the efficiency back. We’d wager that if you’re using DaVinci Resolve, you probably take your work seriously enough to not deliberately throttle yourself with a quad-core. The results here are proof that it doesn’t take much more to improve performance quite a bit. A chip like the 3700X looks like a particularly good value in this test. 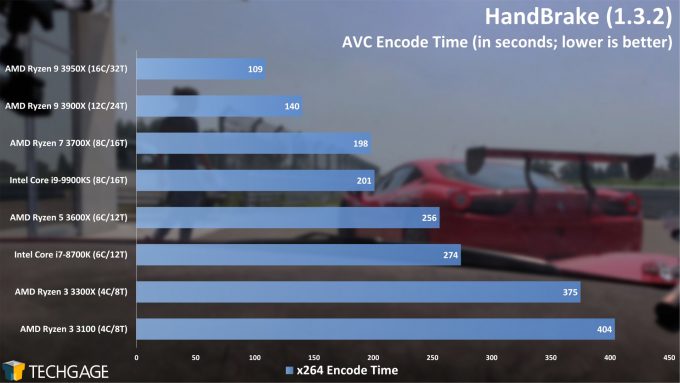 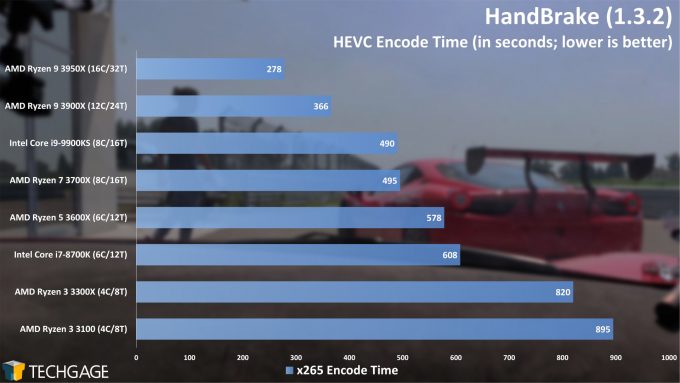 We’re seeing more of the same with HandBrake. It’s clear that if you care at all about CPU-based encoding, you’ll want a decent CPU – which is to say, one that’s going to cost much more than $100. The performance gains by moving to the 3600X (from 3300X) is hugely notable. 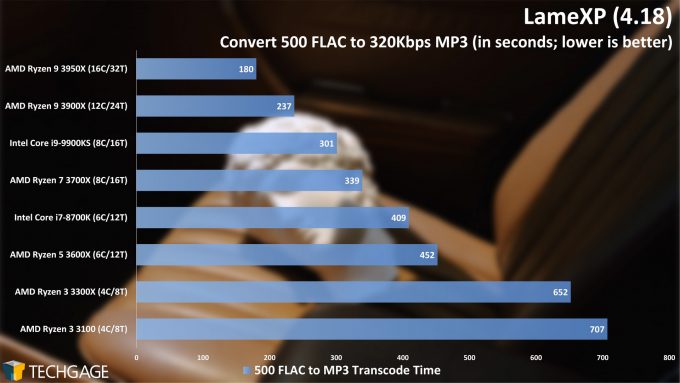 Core count matters quite a bit in a test like this, but so does per-core frequency. Thanks to that, Intel has a strong edge here if core counts align, with the older 8700K six-core beating out AMD’s newer 3600X, and the eight-core 9900KS leaping ahead of AMD’s 3700X.