We’re taking a fresh look at viewport performance in popular design software with the help of SPECviewperf 2020. With 21 gaming and workstation GPUs in-hand, we’re testing not just the performance in Windows, but also Linux – which has made for some interesting comparisons.

It’s been nearly a year since we last took an in-depth look at viewport performance with the help of SPEC’s SPECviewperf, and with the recent release of its 2020 v3.1 update, we felt now was a good time to generate some fresh numbers. As an added bonus, this article marks the first time we’ve run the same tests under Linux. That proved to be a good move, as it gave this article’s results more flavor.

For those not familiar with SPECviewperf, it’s important to note the fact that it is not the benchmark. It’s instead the tool for benchmarking viewports in individual applications, like 3ds Max, SolidWorks, and Siemens NX. To make the magic happen, SPEC captures API traces of the full versions of said applications, and creates viewsets that replicate playback – without the native application needing to be installed.

SPECviewperf’s ability to test viewports without the native application being installed is a huge boon for a couple of reasons. For starters, it means benchmarkers don’t need to secure licenses of these applications to test them, and it also means that they can be tested under Linux, where a handful are not even available. Why test them there, then? Because we get to see how Linux’s graphics system compares to Windows in a fair manner.

We sometimes bundle our own Blender viewport testing in our SPECviewperf articles, but we’re going to dedicate this one entirely to SPEC’s benchmark, and use the upcoming Blender 3.3 release to test the viewport both in Windows and Linux – for the first time since 2.92.

Before jumping into our latest SPECviewperf numbers, here are the GPUs tested, along with their framebuffer sizes, and driver versions used:

The biggest omission in our current-gen graphics card collection is that we do not have any Ampere-based workstation GPUs from NVIDIA. This is unfortunate, but not the end of the world, as we can still piece together where the cards would perform based on the previous-gen Turing-based Quadros, and the Ampere GeForces. We’ll of course chime in where it’s important to – so with that, let’s analyze: 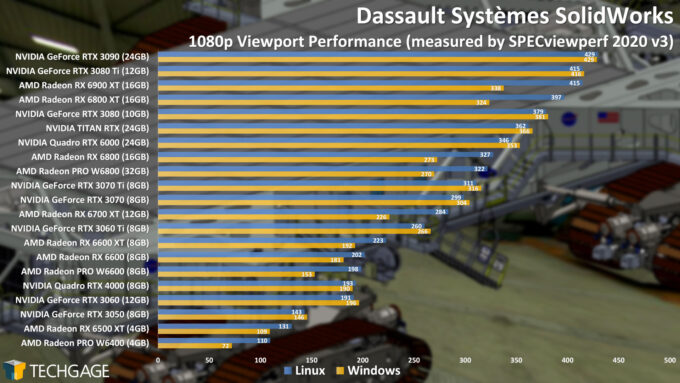 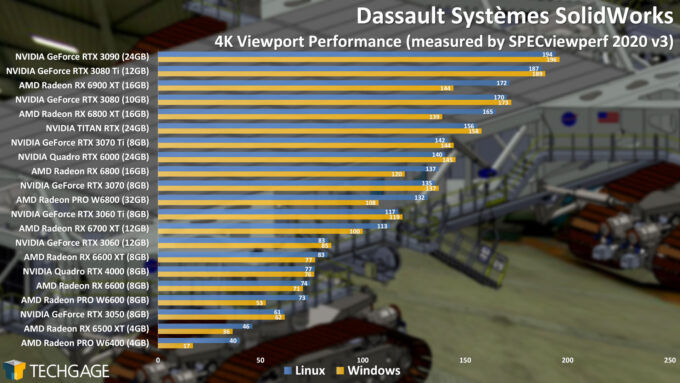 Right off the bat, we’re seeing some interesting results thanks to both Linux and Windows performance being included. We can see that on NVIDIA, performance between the OSes is virtually identical, while AMD stands to see a notable performance boost in Linux.

Aside from that, SolidWorks is a bit more neutral to gaming GPUs than some high-end design suites, but it is worth noting that workstation GPUs are required for the software’s “RealView” mode, which enables better shadows and ambient occlusion in the viewport. SPECviewperf does not test with RealView mode, or else the tested workstation GPUs would experience a significant lead. We tested RealView a bit in a performance article three-years-ago. 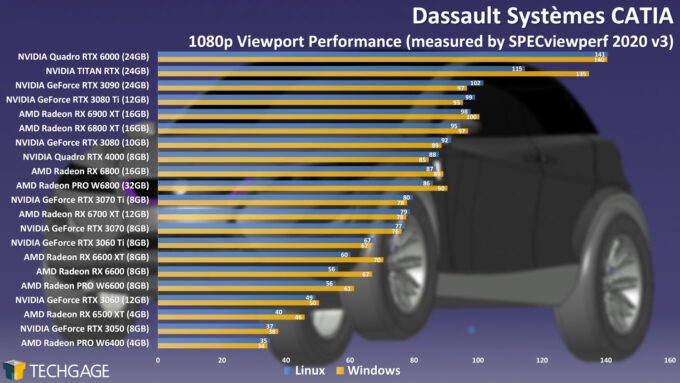 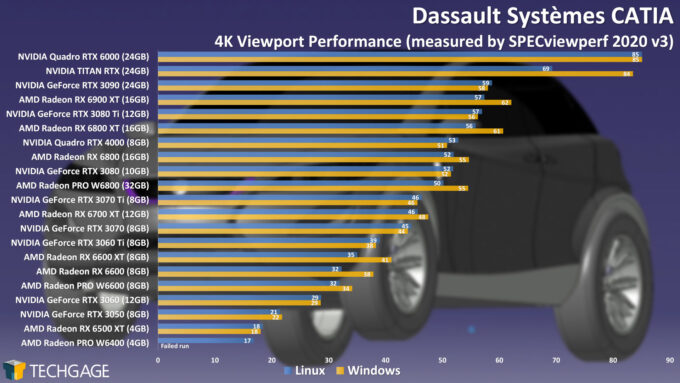 CATIA is an application that seems to prefer workstation GPUs based on its support pages, but fortunately, performance is not held back on gaming-focused GPUs.

Since it stands out a bit, we’ll call out the Radeon PRO W6400 result for failing in the 4K Windows run. We tested this same benchmark back when we reviewed the W6400, and managed to pass the test then, but for some reason, we couldn’t get through this particular run this go-around. The same hold-up happened in PTC’s Creo, which is coming up.

The Radeon PRO W6400 is a competent GPU for its price-range, but its 4GB framebuffer is limiting. At 1080p, it will serve its purpose well enough, but if you are at all dealing with weighty projects, you owe it to yourself to opt for a GPU with a larger framebuffer.

Another result worth calling out is TITAN RTX. Its CATIA performance is notably better in Windows, whereas the rest of the NVIDIA lineup is similar between OSes. We’re still talking top-end performance in either OS, but the differences are interesting, nonetheless. 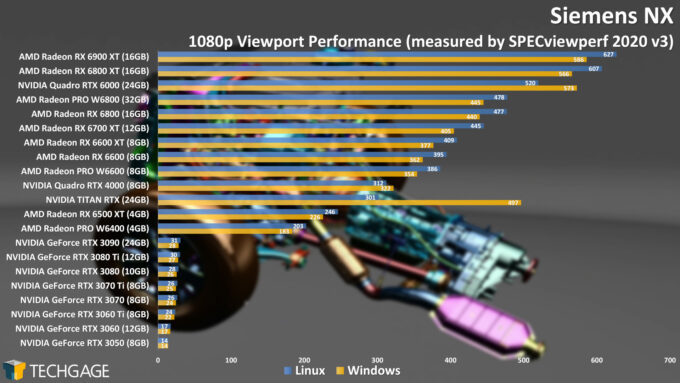 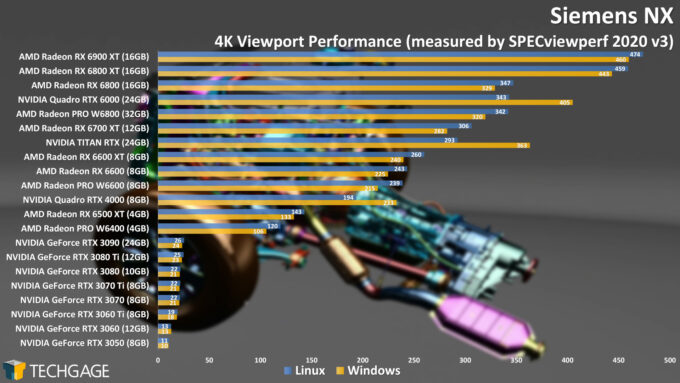 Whenever we test with SPECviewperf, the most interesting results tend to spawn from the Siemens NX test, as there’s a clear difference in performance between the gaming and workstation GPUs. Or, there at least used to be – for years – until AMD shook things up with a recent driver.

For as long as we’ve been testing with SPECviewperf, both GeForce and Radeon have placed far behind the appropriate workstation GPUs in SNX, with what appeared to be deliberate performance throttling. It’s clear to anyone looking that the gaming GPUs of equal spec shouldn’t perform at 1/8th a workstation GPU. Well, as of the Adrenalin 22.7.1 driver, the performance roadblock on Radeon gaming cards is gone.

We reached out to AMD to inquire more about this sudden performance improvement, and were told that the uplift we were seeing was due to the “latest software architectural updates”. We assume that means of the Radeon Adrenalin driver, as the version of the Siemens NX test was unchanged between drivers. With a retest of the Radeon RX 6600 XT, we saw an SNX score of 91.1 with Adrenalin 22.6.1, and 376.6 with 22.7.1.

The 22.7.1 Windows driver is the first to deliver these performance improvements in the SNX test, but this top-end performance has been seen by the Linux driver since SPECviewperf 2020’s release for that OS earlier this year. We do wonder if AMD decided to uncap the Windows performance because its open-source Linux driver held nothing back. Either way, the change is good!

At this point, we’re curious if NVIDIA will spot this suddenly increased performance for gaming Radeons, and give GeForces the same optimizations that the workstation GPUs see. Time will tell. NVIDIA may ultimately see it as unimportant, since Siemens NX users tend to go the workstation GPU route anyway (the cost of a software license makes a proper workstation card seem cheap). 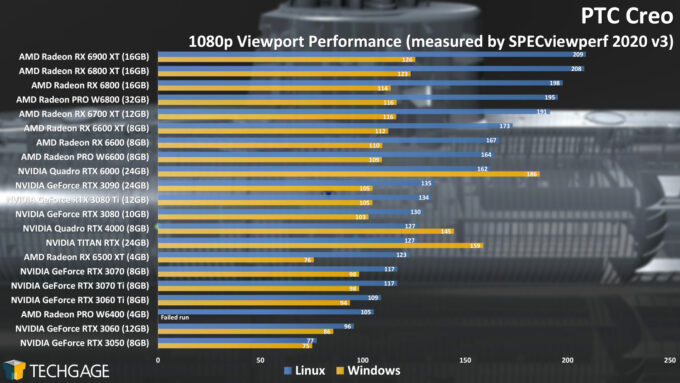 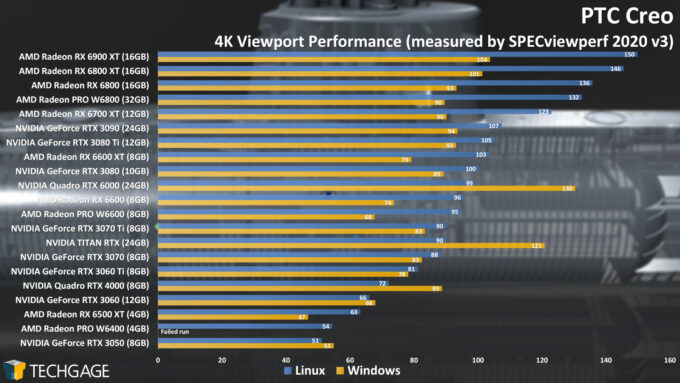 PTC Creo is the second test of the bunch that was unfair to the Radeon PRO W6400. We managed to test all of SPECviewperf at the W6400 launch without issue, but for some reason it simply refuses to get through this test today. When we monitor the GPU’s usage with GPU-Z, we see that the test halts at the exact moment the VRAM nears its top-end limit of 4GB. This is just another reminder that if you deal with projects of reasonable complexity, you’ll really want to opt for a GPU with more memory.

That aside, this test really highlights performance differences between Linux and Windows. In Linux, the overall performance delivered is far beyond what we see in Windows. It’s too bad, then, that PTC Creo is not available for Linux. At least we can see what’s possible.

It’s worth highlighting the fact that AMD performs quite well here overall, with its gaming GPUs performing roughly the same as its workstation cards. That’s interesting in itself, since on the NVIDIA side, we can see its workstation cards leaping ahead of the gaming counterparts. 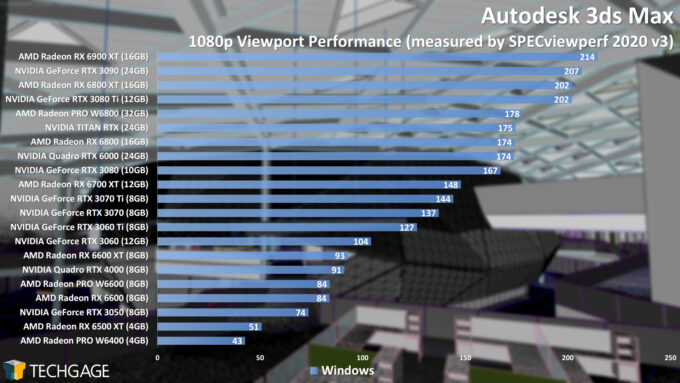 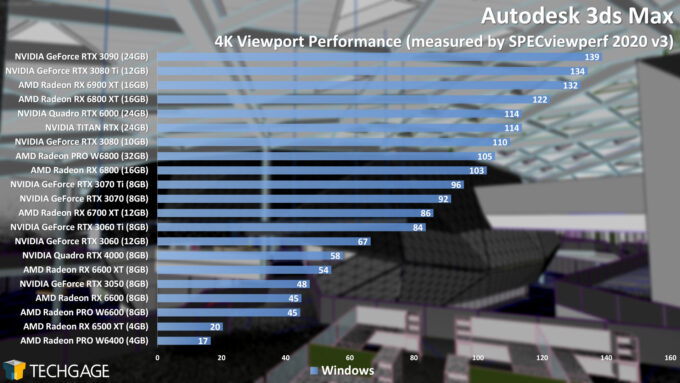 3ds Max is the only SPECviewperf viewset that’s not compatible with Linux, hence that omission here. That aside, the performance neutrality of the software proves itself here, with all GPUs scaling as expected based on their stated specs and our knowledge of the architectures. The top-end gaming GPUs from each vendor seem to be enjoying flip-flopping between each other at the top throughout most of these tests so far. 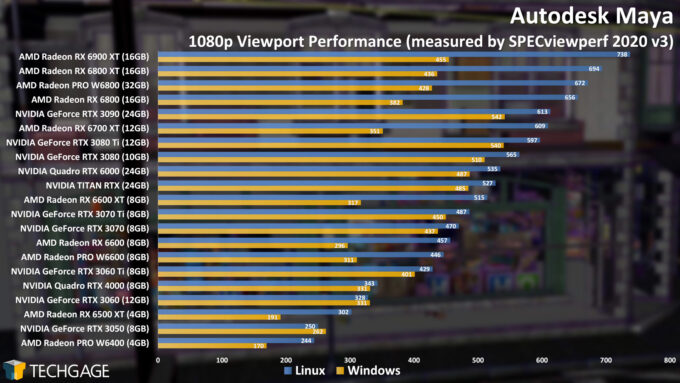 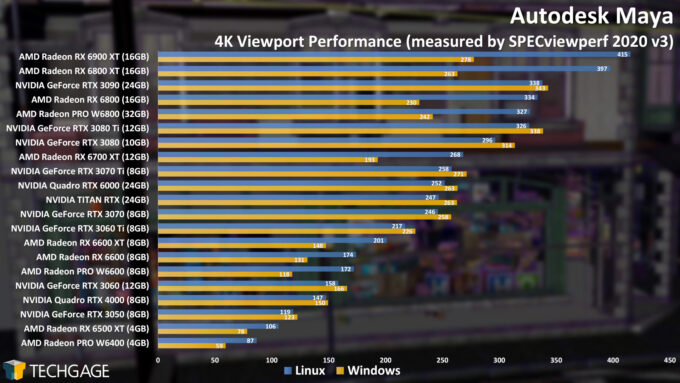 The results above once again assure us that Linux’s inclusion this go-around was a good decision. Just look at the performance delta between Linux and Windows here. On the top-end GPUs, we’re seeing scores hundreds higher – at least on the AMD side. Gaps like these can sometimes imply that something is not rendering correctly, but we reviewed output from both OSes, and all looks great to us.

While some of the viewport tests in this article are tied to applications that won’t even run in Linux, Maya is one of the exceptions. We’re not sure the added performance in Linux will matter to those with 60 FPS screens, but it’s hard to deny that the gains are notable. If the Linux vs. Windows performance differences were like this in most tests, we’d no doubt see a mass exodus of people migrating to *nix. 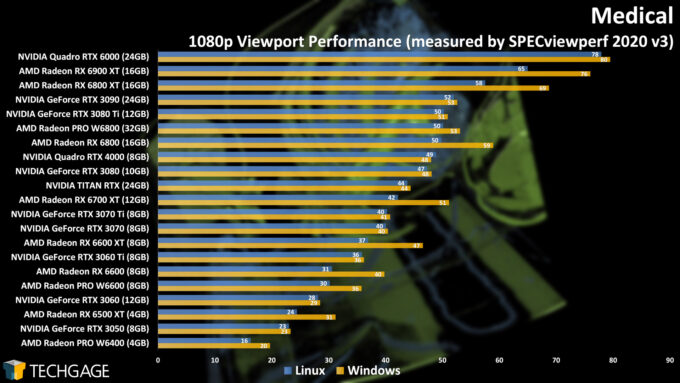 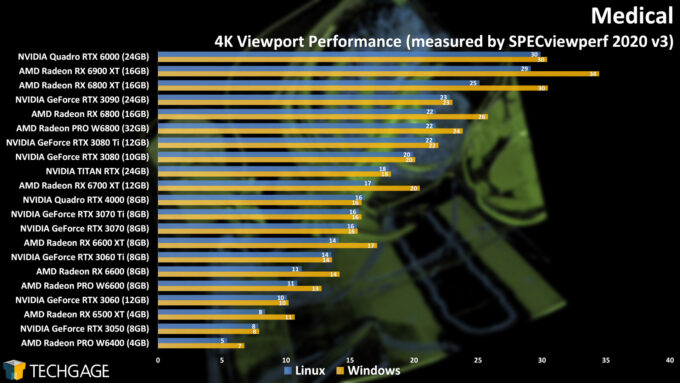 Across most of the test results so far, Linux performance has edged out Windows, with the exception of SolidWorks – and now Medical. This test prefers Windows overall for both vendors, with some notable gains once again hitting the AMD cards. Surprisingly, despite the Quadro RTX 6000 being a last-gen card, it manages to take the top spot in both resolutions here. 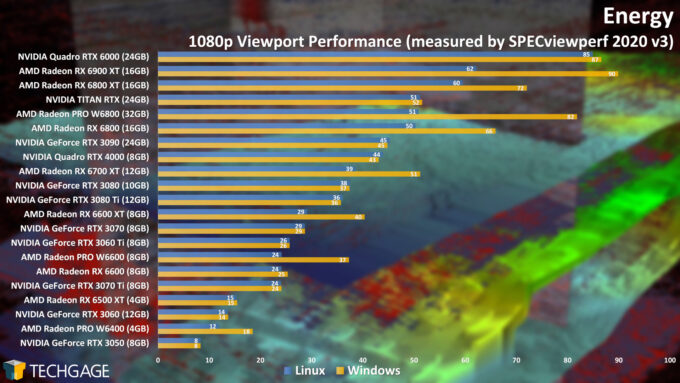 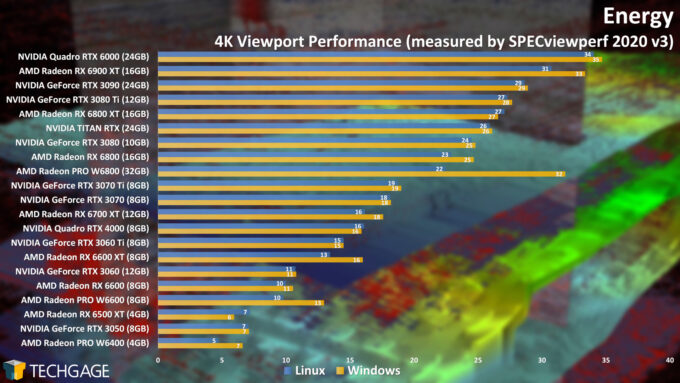 We’ve taken a look at GPU viewport performance with SPECviewperf numerous times over the years, but this article has been, without question, the most interesting look we’ve had yet. That’s largely thanks to the fact that Linux testing was possible, so we thank SPEC for its efforts in developing that version of the software.

After poring over these latest test results, one thing we’re considering for the next full-blown SPECviewperf test run is focusing more on the subtest performance than the overall scores. A score is useful in its own right, but when you can get down to the nitty-gritty of the subtests and understand where exactly a GPU suffers more than another, it should be useful. That requires a lot more poring over of the results, and many more graphs presented, as well.

If you have any questions at all about recommendations for a GPU that suits your needs, please don’t hesitate to throw your thoughts into a comment below.

As mentioned earlier, we’re planning to perform Linux vs. Windows viewport testing for the upcoming Blender 3.3 release, as these OS comparisons have proven quite fun so far. Until then, happy creating!