Throughout all of our benchmarking tests, regardless of what we are reviewing, testing is done in a clean and stand-alone version of Windows XP Professional with SP2. The exception is in our SYSmark 2007 tests, which uses Windows Vista Ultimate. No Windows Updates are applied for the sake of time, unless one is required for a piece of hardware on the computer.

We’ve recently updated our methodology, to reflect a more real-world experience. Instead of tweaking Windows to a minimalist state, we leave all initial processes running, as it is a realistic scenario. The primary form of computer latency is a network, so all network devices are disabled prior to any testing. This is done in addition to:

Games that are used for benchmarking have their average frames per second recorded with the help of FRAPS 2.82. Here is the specs of the machine used for todays testing:

Because we are using both DDR2 and DDR3 motherboards, it’s important to lay out the settings we used. These are based off what we feel to be the most common at the given frequency. For DDR2, we didn’t want to go beyond 1.9v, which is +0.1v above DDR2 standard. The same goes for DDR3, so we are using 1.6v with reasonable timings that should be possible on most DDR3-1066 kits. The memory speeds used are as follows: 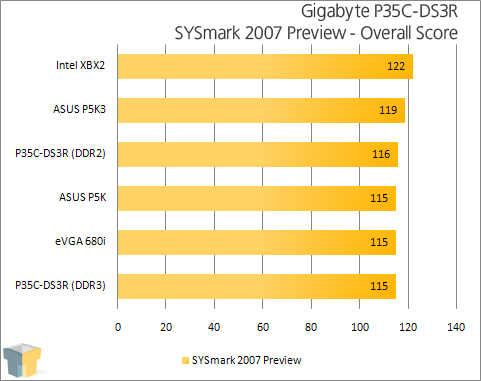 Intel’s XBX2 excelled in this test, for whatever reason, but ASUS’ P5K3 fell not too far behind. The DDR2 configuration with the P35C-DS3R exceeded the performance of the DDR3 by a small margin. Very, very small. 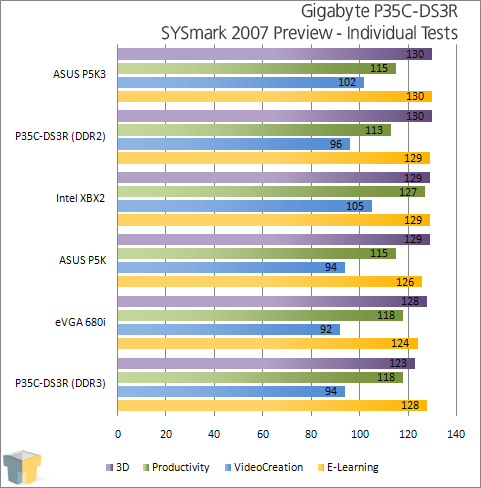 When looking at the individual scores, it’s easy to see that in the end, no board has an obvious advantage through all of the tests. Some excel in one test while others excel in another. Seen here again though, our DDR2 configuration performed better than the DDR3.