Mafia II – A Look at Performance

Our review of Mafia II was published earlier this week, but thanks to the fact that all we had accessible up until launch was a preview build, the performance testing had to wait. Well, that’s now all done, so if you’re looking to see which GPU will serve you best for some hardcore Mafia action, look no further.

When we published our review of Mafia II earlier this week, we left out something we were planning to include since the beginning… performance information. The reason for the omission was twofold. First, prior to the official launch of the game, all we had was a “preview” copy, and it contained obvious flaws. Of course, it’s hard to feel confident in performance data at that point.

The second reason is that both AMD and NVIDIA released launch drivers for the game, so waiting for the official launch meant that we’d have even more reliable data. So, after our review of the game was published, I got down to benchmarking and put the game through its paces, both with and without PhysX.

As mentioned above and also in our review, Mafia II includes PhysX support, and NVIDIA has been heartily touting that fact for a while. But because PhysX acceleration is primarily limited to NVIDIA’s own graphics cards, it’s not going to be a major focus of our testing. Though we plan to introduce Mafia II into our graphics card testing suite, we won’t likely be including it with PhysX support since from the get-go it’s unfair to AMD.

For the purpose of this brief article, though, we’ll include both performance with and without PhysX, although for the latter, we’ll be using the built-in benchmark as there are no heavily-utilized PhysX sequences in the game that are easily accessible on a repeatable basis. If the game had included a better saved game scheme, this issue wouldn’t have existed. 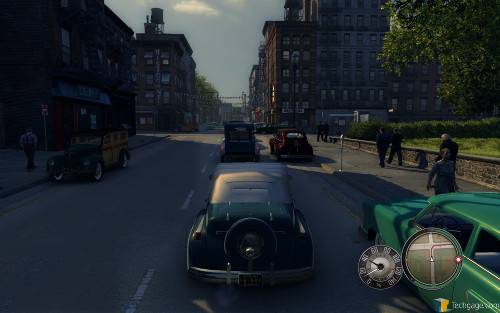 Because it does, though, we had to find a chapter that allowed us to perform a manual run-through right away, without a ton of dialog. We chose chapter 7 because it starts us out on a street corner with many buildings, cars and people visible. From this point, we jaunt up to the sidewalk and around the corner to the garage where we hop in our car, and then drive the same route that ultimately leads us to the middle of Lincoln Park.

As it stands, we might be changing our run-through before it hits our GPU suite, as we have a bit more exploration to perform. If we can find a more replicable method of benchmarking the game, such as to find a portion of a chapter where it auto-saves in the middle, we might do that. As it is, it’s a bit tedious to wait for the chapter title and then skip the cutscene each time. For this article, I did that about 80 or so times!

To keep this “article” to a single page, I’m going to rush through the explanation of how we do things. For a more thorough look, please refer to one of our recent GPU reviews. Like all of the games we test, we performed manual benchmarking here, with the exception of our PhysX-specific testing where we used the timedemo.

For our manual tests, we used FRAPS to record the framerates. Each card and resolution were tested twice over, and if the results matched up, they were kept. If not, we continued testing until we had reliable data. Mafia II is unpredictable with things like traffic and people on the sidewalk, so some of our runs had to be scrapped and performed over.

Also, for the sake of both time and the fact that we imagined this game would have to be completely rebenchmarked over the next week, we only used four graphics card models from both AMD and NVIDIA, mid-range and higher.

Here are the specs of our test system…

… and here are the performance results: 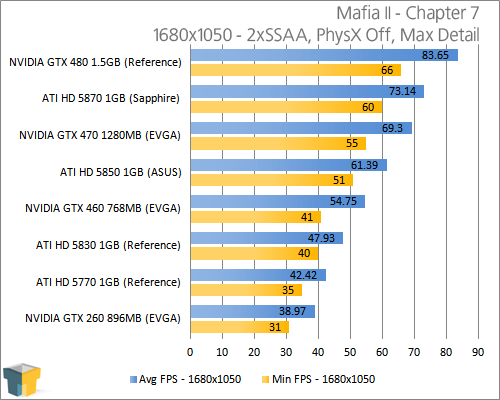 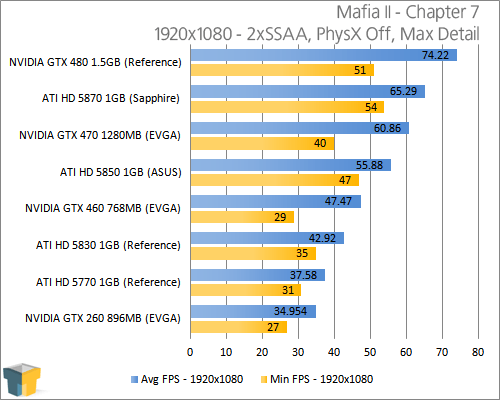 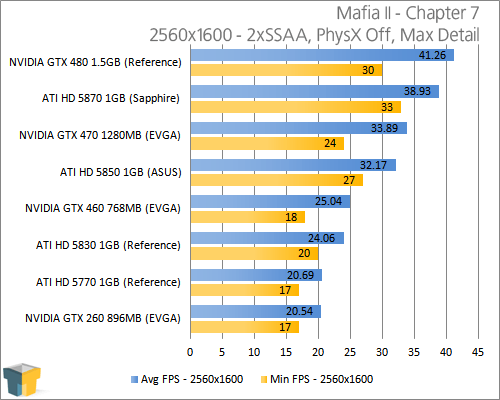 In the AMD vs. NVIDIA battle, it’s clear that the green team has the best overall cards for Mafia II, even without PhysX. But, to be fair to AMD, the game is a “The Way it’s Meant to be Played” title, so the performance differences aren’t all too surprising. Even still though, the performance does pretty well line up as we’d expect it to regardless of it’s TWIMTBP status.

How about things on the PhysX side? Well as mentioned before, we simply used the in-game demo for the sake of being able to test out the PhysX element quickly, and we only performed testing on NVIDIA’s cards, since it’s unfair to AMD’s. We also tossed a GTS 250 into the mix to use as a dedicated card, to show the differences between running PhysX on your primary GPU or having a dedicated card for the job. The PhysX detail was set to “High”. 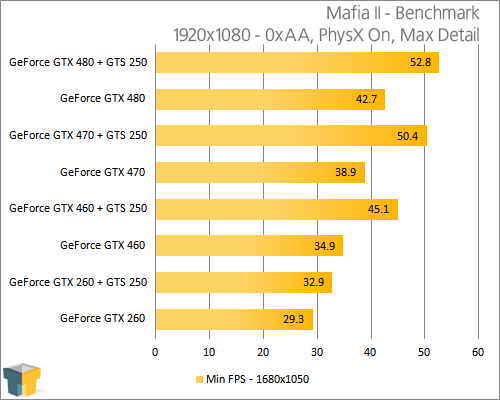 For NVIDIA’s 400 series of cards, the GTS 250 card gave a nice boost to each. For the GTX 260, however, which isn’t a far step up from the GTS 250, the differences are almost not even noticeable. If you happen to have a GTX 260 and a spare card similar to the GTS 250 kicking around, then it’s good to put it to use, but you shouldn’t go out of your way and purchase one for the purpose… the differences are just too small.

Hopefully this brief article has helped you in your search for the perfect GPU for your setup, PhysX or not. Please be aware that no matter your GPU, utilizing PhysX is going to hit performance in a rather noticeable way in many portions of the game, so if you are going to take the PhysX route, having a dedicated card is going to be important. You’ll lose almost 30 – 40% performance with PhysX enabled, but a dedicated card can give almost half of that back.

For reference, throughout all of this testing, I came to surmise that 40 FPS is the minimum you’d want to experience this game without noticeable lag, although depending on how much that bothers you, you might be able to go as low as 30 FPS, but certainly not much lower.