Here, we compare our overclocks of the memory being reviewed alongside other recently evaluated sticks. These graphs include benchmarks with each kit of ram at DDR2-1000 4-4-4-12-13 2.1v along with each kits own top overclock. While the DDR2-1000 results should not vary much, the top end overclocks will, given that each kit will top out differently.

One thing I want to point out is that even though I am comparing the 4GB kit to 2GB kits, the performance differences shouldn’t be taken with too much weight. The fact is, 2GB kits will always overclock higher than a 4GB kit, until we reach a day where chips are better refined and able to churn out higher speeds. This might not happen until DDR3, it’s hard to say at this point. The fact that we hit 600MHz on this kit at all is impressive. When in comparison, an overclock like that on a 4GB far surpasses any other overclock in the above list. These comparisons are to show you head on what the differences you can expect will be. These do not take into consideration multi-tasking benefits, which would undoubtedly be far better with additional memory, regardless of whether or not you lose 1,000MB/s on average.

In comparing 4GB to 2GB, the OCZ SLI-Ready PC2-7200 kit had the same top overclocked settings, so you can compare those two to see the immediate differences. 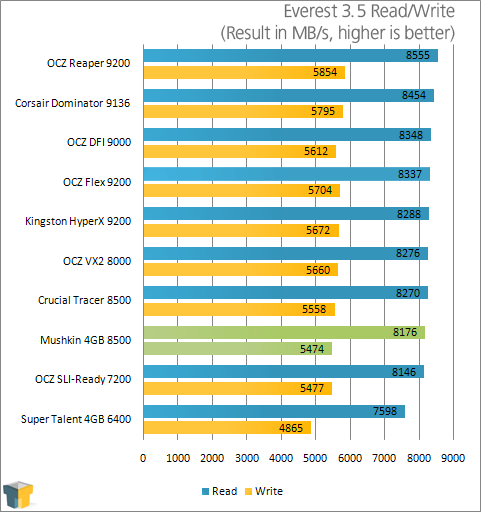 Compared to that OCZ kit, the Mushkins 4GB scored 30MB/s higher in the Read tests, but 3MB/s lower in the Write tests, which are not really memory related as much as they are FSB reliant. 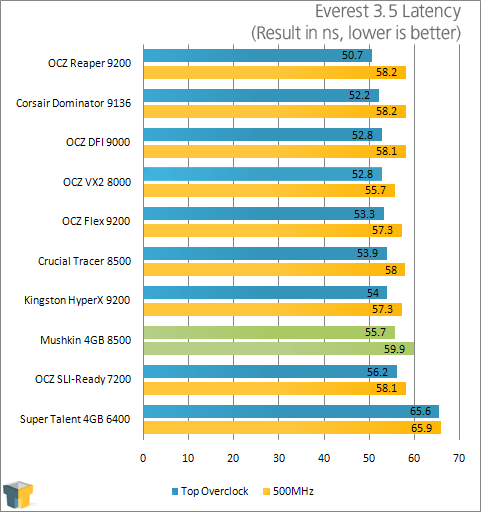 Again, despite the higher bandwidth, the latency when compared to the OCZ kit was lower on the Mushkin kit. I am actually quite impressed with this fact, because I had assumed it would be lower. I believe the reason for this is that since there is always so much bandwidth to deal with, there will be more free bandwidth to access at any given time, hence the improvement. 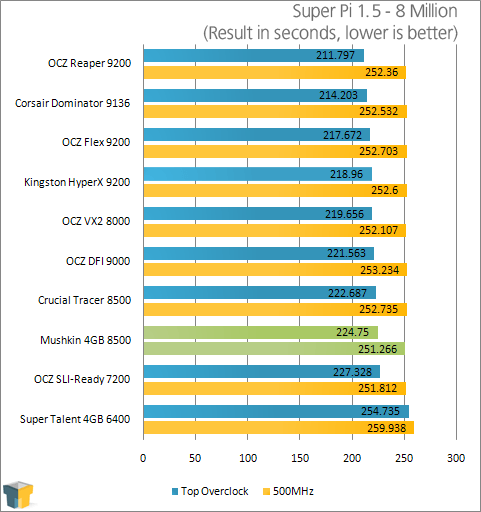 Where do I begin? This is one of the most impressive kits I’ve laid my hands on in quite a while. With performance as displayed here, moving up to 4GB won’t feel like such a burden. As we saw throughout some of our tests, when compared to a 2GB kit at the same speeds and timings, Mushkin’s kit proved to have better overall scores, in every single test. Whether it be higher bandwidth or better latency, the XP2-8500 performed exceptionally. Because of all my tests, I need to re-think a few things. I felt strongly that a 2x2GB kit at equal speeds to a 2x1GB kit would prove far worse performance, but that couldn’t have been further from the truth.

While we are on the subject of benefits, here are a few more. With 2x2GB, you can have 4GB of ram without sacrificing 1T timings, if you wish to run them at a low frequency. I am not even going to assume that anyone will do such a thing with this particular kit, because it would be a waste of money. However, the potential is there for great latency results. As for stock settings, most DDR2 kits will run 4x1GB at the same speeds, but that means two things. More heat inside your computer and definite need of a fan (if you care that much about temp, like I do).

2x2GB allows better airflow because you don’t have four sticks of ram crammed together. Even still, this kit requires 2.3v like many performance kits on the market, so I highly recommend getting a fan even at stock speeds to keep things running well. I personally recommend Corsairs Dominator Airflow fan. It’s not as effective as ghetto-modding a 120mm fan on top of the modules, but it’s the next best thing if you want to keep your case looking good 24/7.

So, are these modules for you? That’s for you to decide, and you only. The biggest hurt is the $700 price, but from any standpoint, it’s somewhat understandable. Fact is, this is the -only- 4GB kit on the market that will handle DDR2-1066+ speeds reliably, although their PC2-6400 4-3-3 4GB kit has been known to overclock to meet the stock speeds of these sticks. If you do not care that much about added bandwidth or latency, I’d quicker recommend those since they retail for $200 less. Even if you overclock those sticks to DDR2-1000, it will be a sweet deal.

For the hardcore enthusiast, if you happen to manage the same overclock of DDR2-1200 that I did, you will be one of the very few (I still haven’t seen anyone else do this) to run 4GB of ram at those speeds stable. Running 4x1GB at the same frequencies is incredibly difficult and as far as I know, no one has ever managed it stable. The fact that is was stable at 2.5v is another impressive feat. I still don’t recommend that at a 24/7 setting, but if you have good airflow you might be alright. If you insist on those speeds, I’d touch the modules after stressing them to see how hot to the touch they have gotten. If you are using a fan and they are still too hot to keep your finger on for a few seconds, I’d clock down. It’s just not worth bricking a killer set of ram.

I am awarding Mushkin’s 4GB XP2-8500 an 8 out of 10 along with our Editors Choice award. How does a $700 kit deserve an Editors Choice award? Bear in mind that these are for hardcore gamers and overclockers only, not for your mom or dad. They are expensive, but again, they are the only kit on the market to handle these speeds, and have been since their launch. Given that, there is absolutely no competition. Even still, I recommend their still very overclockable XP2-6400 4GB 4-3-3 kit for those who don’t need the most extreme overclocks out there.

To save even more cash though, I’d recommend two kits of 2GB PC2-8500 sticks, to run 4x1GB PC2-8500. If you have a definite need for performance and 4GB though, these modules might just be for you. At the time of writing, the cheapest place to purchase a pair has been Mushkins own site, where they currently sell for $661.