Here, we compare our overclocks of the memory being reviewed alongside other recently evaluated sticks. These graphs include benchmarks with each kit of ram at DDR2-1000 4-4-4-12-13 2.1v along with each kits own top overclock. While the DDR2-1000 results should not vary much, the top end overclocks will, given that each kit will top out differently.

Given the fact that this kit didn’t overclock and has low stock speeds to begin with, we can basically already garner where it will rank on the graph. Since the Super Talent kit could not hit the 500MHz minimum for our Everest Latency and Super Pi charts, the stock setting was used instead. 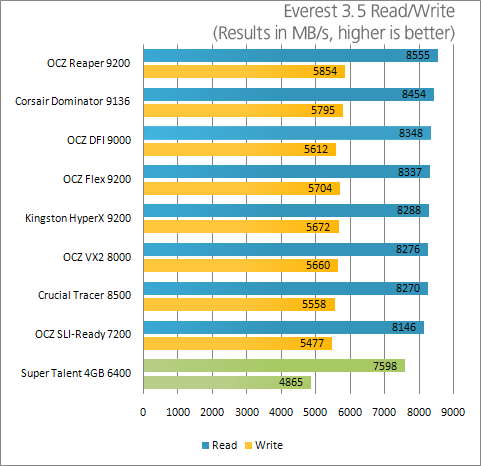 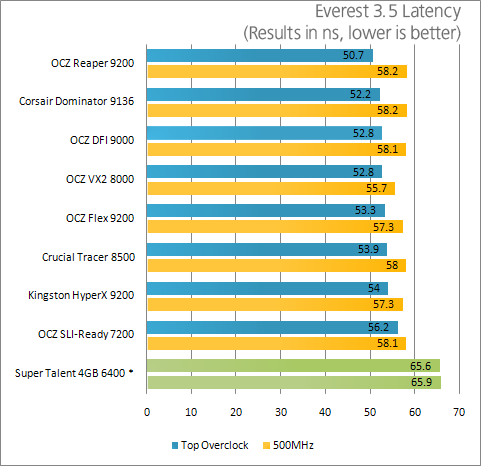 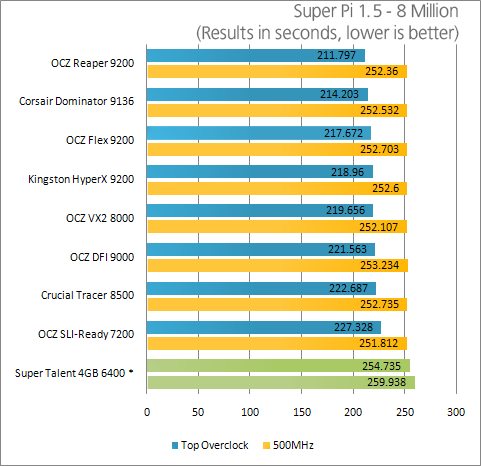 Since this is the first 4GB kit I’ve reviewed, it’s almost difficult to give a final thought. This is primarily thanks to the fact that I have not used other comparable 4GB kits, so I am unable to compare it’s performance on that regard, in addition to overclocking ability. The fact is, if you want a performance 2x2GB kit, you will need to pay upwards of $500 for Mushkins PC2-6400 which has been known to overclock to PC2-8500 speeds.

To gather a better idea of how to rate these modules, I headed over to a popular e-tailer to take a look at what they are offering in the 4GB arena. At the time of writing, this particular Super Talent kit retails for $329 which isn’t too bad, all things considered. Just two weeks ago the same kit was $379, so prices are rapidly dropping.

Because of the total lack of overclocking ability though, you can pick up an equivalent kit for less money. Mushkin for example offers a similar speced kit for $10 less, while both GeIL and G. Skill offer ones for $35 less. At that point, it’s difficult to recommend Super Talents kit because those others offer the same performance, for less. Of course, prices are not set by Super Talent themselves, but rather the e-tailer. Therefore, if you do some shopping around you may very well be able to score this kit for less than $329. 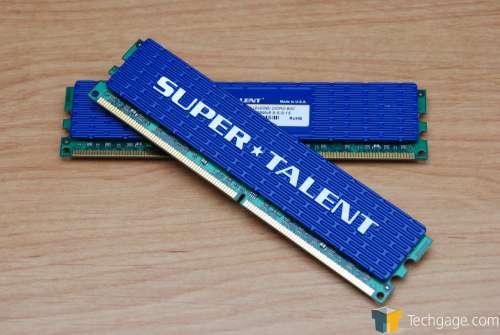 That said, I am awarding the Super Talent 6400 4GB kit a 7/10. If you are in the market for 4GB of ram and find a good deal on these modules, you can’t go wrong. Just don’t expect extreme performance as the package suggests.

I believe these modules would have fared better if Super Talents chip selection was different. I am unsure what these modules use, but I have a feeling they are not Micron, but rather Hynix or some other brand that rarely overclocks well. Although those chips are cheaper, they have no real reason to please enthusiasts. I am hoping to see ST release more 4GB kits in the future, but to choose their chips more wisely if it’s going to be called a performance part.

This review was originally posted with a rating of 7/10, but after deeper consideration I have changed it to an 8/10. Normally we don’t do this after a review is posted, but I realized I was unfair in my overall judgement (which could have been the result of finishing it up at 3:00AM). These modules well earn an 8/10, good overclocking ability or not. Even pairing up 4 1GB modules together for the same speed would likely cost you more than these, but these modules here at least allow you to keep your 1T timing. Thanks to a few of our readers for bringing these points to my attention.

I have also added a piece on page two about the requirements for using 4GB of ram.